A new spider genus and species named for a famous writer takes a unique approach with its defensive stinging hairs.

Photo: A male individual of the new species and new genus of tarantula Kankuamo marquezi is seen in its natural habitat. Credit: Dirk Weinmann A new genus and species of tarantula discovered in Colombia does something no other spider in its subfamily does: It uses its defensive stinging hairs for direct contact against aggressors instead of shaking them loose.

The tarantula, Kankuamo marquezi, was found in Colombia's Sierra Nevada de Santa Marta mountain range by a research team led by the University of the Republic, Uruguay's Carlos Perafán.

It was named in honor of famed Colombian novelist Gabriel García Márquez, whose classic "100 Years of Solitude" was among the works that helped him win the 1982 Nobel Prize for literature.

Indeed, animals that come too close and threaten the tarantula might not find much in the way of solitude. The spider weaponizes tiny urticating, or stinging, hairs by gathering them into a kind of oval spear. Touch it and hurt -- or worse. Such hairs (in spiders, they're not the "big" hairs we can easily see but smaller ones that cover the abdomen) are used defensively by some New World spiders, a number of caterpillars and a variety of plants. They can be lethal to some small mammals (if the hairs penetrate their mucous membranes and cause edema) and can cause serious skin irritation in some people.

Meanwhile, the rest of the spiders in K. marquezi's subfamily (Theraphosidae) take a different approach with these defensive hairs . They furiously rub their back legs on their stomachs and effectively "kick" the hairs off their bodies, leaving a Pigpen-like hair cloud behind that can strike a too-curious creature.

To offer a visual, here's a video that shows such a cloud of hairs after they're "kicked" by an agitated Mexican red-knee tarantula: 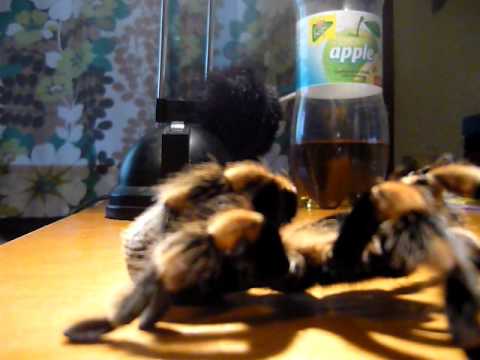 Perafán and his team first witnessed the spider's hairs forming into a lance-like shape when they handled it during an examination.

The new spider's characteristics "open the discussion about the phylogenetics relationship between subfamilies of Theraphosidae tarantulas and the evolutionary pressures that gave rise to the urticating hairs," the researchers offered in a statement. "This new finding is a great contribution to the knowledge of the arachnids in Colombia and a sign of how much remains to be discovered."

Detailed findings about the new tarantula have been published in the journal ZooKeys.