The extraordinary winds are a product of Storm Henry, which prompted severe weather warnings and caused thousands of power outages this week. →

The wind is so strong in Scotland that water is getting blown back up waterfalls, seemingly against the laws of gravity.

Footage shared by a cottage rental firm based in Mull, Scotland shows 90 mile per hour winds stopping a waterfall on the Isle of Mull dead in its tracks earlier this week. 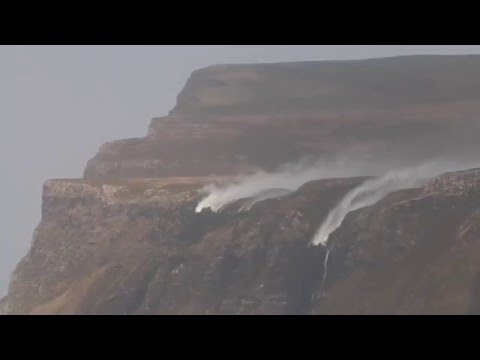 The extraordinary winds are a product of Storm Henry, the latest windstorm of the season, which has prompted severe weather warnings and caused thousands of power outages this week.

While Henry's waterfall-stopping powers were certainly impressive, the strongest recorded wind of the UK/Ireland windstorm season so far occurred on Jan. 29, when Storm Gertrude produced a blustery gust that reached speeds of 105 miles per hour.

This week we look at some of the most spectacular waterfalls around the world -- and some smaller falls that are found in beautiful settings. Above a helicopter flies past Yosemite Falls at Yosemite National Park in California.

Slackliner Walks Over A Waterfall: Photos

Above, cascades on the Ausable River in New York's Adirondack Park. The park holds more than 6 million acres of forests, lakes, rivers and streams.

A View of the American and Bridal Veil Falls at Niagara, Niagara Fall are seen at dawn, showing both Ontario and New York State.

Waterfall Gullfoss in Iceland is seen in winter. The falls are one of the most popular tourist destinations for day trippers in Iceland.

A streams flows across the Colorado River Basin in Zion National Park, Utah.

Victoria Falls in Africa marks the border of Zambia and Zimbabwe. The falls are considered the largest in the world, based on width (5,600 feet) and height (354 feet, twice that of Niagara Falls).

Iguazu Falls flow through the border of Argentina and Brazil. In the indigenous guarani language of Argentina, the term "Iguazú" means "great waters." The falls were discovered in 1541 by Alvar Núñez Cabeza de Vaca.