Nearly every primate, including humans, hates getting ripped off, finds research.

Monkeys, chimps and other primates go ballistic when they receive unequal pay, much in the way that humans fume under similar circumstances, according to a new study that also helps to explain the reaction.

The angry response to perceived unfairness evolved in order to support long-term cooperation, according to the research, published in the journal Science.

The research explains a popular video that went viral. The video shows what happens when a brown capuchin monkey figures out that he's being ripped off. 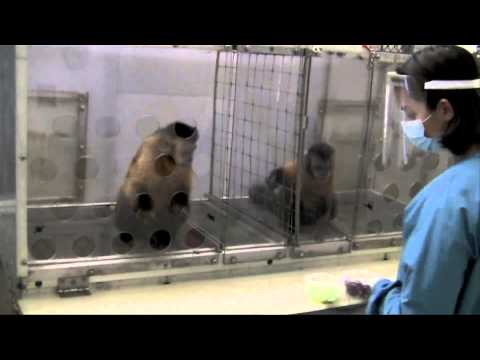 Even Sarah Brosnan of Georgia State's department of Psychology and Philosophy, who led the new study, still gets a kick out of this classic experiment.

"The video is definitely the best," she told Discovery News. "The presence of this response across so many species likely indicates that we - and these other species - evolved to respond this way because it was so beneficial in the context of cooperation."

She continued, "We are certainly not the only species that responds to inequity now, and it seems very likely that our ancestors did as well, especially as we know that they cooperated on a large scale."

The video was shot in 2003, and since then, Brosnan, colleague Frans de Waal and others have determined that nine primate species, including humans, have an aversion to inequity. They reviewed the research for the latest study, as well as experiments conducted by other teams.

It's likely that there is a genetic component to the behavior, as well as a learned one. What is clear is that humans aren't the only ones who sometimes feel slighted, and this can be very emotional.

Video: Should Chimps Have Human Rights?

"We don't know how other species feel about inequity because we can't ask them," Brosnan said. "That being said, it is likely that their responses are underpinned by an emotional reaction to the inequity of a situation, much as ours are. One difference in IA (inequity aversion) in humans as compared to other species is that for us, fairness has become a social ideal, which is unique to humans."

A potential game changer could be the Internet and the global economy, which has us interacting with people from around the world but not necessarily face to face. Brosnan thinks inequity aversion still persists, however.

"It's really interesting to see how fairness continues to be a part of remote cooperation," she said. "Even in the digital age, expectations of equity exist, and if fairness norms are violated, people may seek other partners."

"For instance," she continued, "many online markets utilize a rating system whereby both users and sellers can rate one another. Many things that are commonly discussed relate to fairness: Did you get the product you expected? Is it in good shape? Did it arrive in a timely manner? etc. These virtual systems allow remotely connected humans to choose their partners, which is exactly what we think inequity is used for."

The researchers also found that responding to getting less than a partner is not the only aspect of fairness. For a true sense of fairness, it also matters if you get more.

Brosnan and de Waal theorize that individuals should be willing to give up a benefit in order to reach equal outcomes and stabilize valuable, long-term cooperative relationships. Thus far, this has only been found in humans and their closest relatives, the apes.

"Giving up an outcome that benefits you in order to gain long-term benefits from the relationship requires not only an ability to think about the future, but also the self-control to turn down a reward," Brosnan said. "These both require a lot of cognitive control. Therefore, we hypothesize that lots of species respond negatively to getting less than a partner, which is the first step in the evolution of fairness, but only a few species are able to make the leap to this second step, which leads to a true sense of fairness."

Chimps are smart, sassy and funny, especially when dressed up like little people. But did you know that they’re much more like us than we might realize? For one, they’re cold-blooded killers, carrying out brutal raids on other chimp groups to expand their territory. The attacks are most often done by patrolling packs of male chimps that are "quiet and move with stealth," according to the study’s lead author, John Mitani of the University of Michigan. And it works for them: they get land, extra food and resources, and even better access to females.

Chimps Engage in 'War' for Turf

Male chimpanzees have spines on their penises that likely increase stimulation during mating, according to a study in Nature. Human males once had them too, but they dropped this trait. Lucky for the ladies –- or unlucky, as the case may be -- because the penis spines, while improving stimulation, can also be pret-ty painful for females during intercourse.

Chimps Have Better Sex Than Humans

Chimps looove green monkey oranges and will go to great lengths to open the stubborn fruit. In fact, three chimpanzee groups opened the fruit in different ways, showing that chimps can innovate. The chimps, all living in Zambia, invented eight different ways to get inside the hard-shelled fruit: bang it against a tree or a rock; throw it; nibble a hole; go at it with your teeth; smack the fruits together; stomp on it; and peel it.

Tickle chimps and what do you think happens? That’s right, they giggle like children. Their laughter comes in the same sorts of situations as humans, sounds like a human and they laugh more than we do, since they can do it while inhaling AND exhaling. Other animals giggle too when tickled, including rats and puppies.

When you’re working with someone on a project, you follow along with what they’re doing and offer them help when you sense they need it, right? Chimps do the same thing, sharing a tool or physically chipping in on team projects. And once they learn to help a friend out one time, they’ll do it up to 97 percent of the time.

Videos of chimp colonies show our closest cousins treating each other in dying and death much like we do. In one video, two chimps kept a vigil over a dying community member, touching and grooming her. In another, a mother shoos flies away from her recently deceased infant. Mother chimps have also been seen carrying dead babies around for weeks after they pass, some until they’re mummified.