Jibo acts as a photographer, a storyteller, a personal assistant and a telepresence avatar.

Cynthia Breazeal, the famed roboticist at MIT's Media Lab and a pioneer of social robotics, is unveiling her latest creation today. Unlike her previous robots, created for research and used in settings like classrooms and hospitals, her newest robotic device is designed for people to use at home. Breazeal hopes users will find the robot, called Jibo, so fun and friendly that it will become "part of the family."

"Jibo, please introduce yourself," Breazeal says, looking at the little robot next to her during a demo last week in New York City.

Anything You Can Do Robots Can Do Better

Jibo doesn't move. She tries again, and this time the robot springs to life, spins its body, blinks its eye, and talks about itself in an excited -- if a bit robotic -- voice.

Breazeal says Jibo is designed as an interactive companion and helper to families, capable of engaging people in ways that a computer or mobile device aren't able to. The secret is not powerful processors or better sensors; it's emotion. Jibo is different from other gadgets because it treats you like a human being, she says. "Emotion is the next wave of this humanized high-touch engagement with technology."

Jibo will come equipped with an initial set of apps, or "skills," as Breazeal calls them, that will allow it to play different "roles." For example, the robot will be able to act as a cameraman, tracking faces and snapping pictures so you can be in the photos. It could also act as an assistant who reminds family members of their schedules, or as a telepresence avatar that helps people connect with each other.

Another application is as a storyteller, Breazeal says. Jibo will be able to tell stories using sound effects, graphics, and movement, "bringing content to life and engaging kids in a playful way."

"Robots are about the autonomy and the partnership and playing the role versus being a tool that I got to pick up and poke at," Breazeal explains. "So it's not just what it does, it's how it does it. And the new use cases that that enables."

Breazeal knows that her startup, Jibo Inc., with offices in Weston, Mass., and San Francisco, Calif., can't explore all of the robot's possibilities by itself. So it's opening it up for developers, who'll be able to create -- and sell -- applications that give Jibo new functionalities, much like the apps we download on our smartphones. (An approach also adopted by another social -- and emotional --robot, Pepper, created by Aldebaran Robotics and SoftBank.)

"The purpose of doing the crowdfunding campaign right now is we want to build a community," she says. "We want to engage people who want to have Jibo in their home and those who want to develop for it. We're early enough in our development cycle that we can take that input and we can be responsive to it."

Like most crowdfunded projects, Jibo has a cool promotional video demonstrating its possibilities:

But keep in mind that Jibo is not a finished product that's ready to ship to people's homes. It's still, at this point, in its early stages of development.

In fact, I had hoped that the current prototype would be at a more advanced stage. The demo Breazeal showed me last week was based on a set of pre-programmed actions, the robot wasn't really changing its behavior based on interactions with users.

But then again, that's why Breazeal launched the robot as a crowdfunded effort.

"The way that the personal robots revolution is going to really happen is by making it a platform," she says. "Because once you do that, suddenly you can have a robot that can do many things for you, for many different people, versus these niche robots that only vacuum or only clean your gutter."

Jibo is powered by an ARM processor and runs Linux. It has two cameras, which allow it to detect and track people, a microphone array for sound localization, and touch sensors on its body. Three motors and a belt system allow Jibo to move fast and smoothly. It uses WiFi for connectivity and will be typically plugged in for power, though with a battery (not included) it will be able to operate for about 30 minutes.

Anything You Can Do, Robots Can Do Better

Of course, what will make Jibo capable is software, which will allow it to recognize and track faces, understand speech, and adjust its behavior based on individual family members. (Developers will be able to create apps in JavaScript and access Jibo's functions through the SDK.)

Here's Breazeal describing the robot and her vision during our meeting: 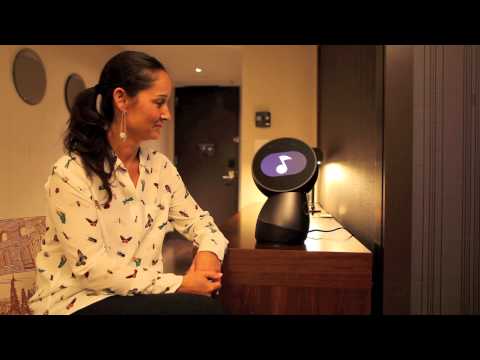 I mentioned to Breazeal that I felt some people would not call Jibo a robot. I mean, it's a robotic device, but is it really a robot? I'm sure some people will ask, "Where are the arms?" and "Why can't it roll around?" I asked Breazeal if she explored prototypes with arms or a mobile base, to give it more capabilities around the house.

Breazeal says there's no question that Jibo is a robot. "It's a social robot," she says. And no, she insisted that they did not build robots with arms or able to drive around. Because of their cost and complexity, manipulation and locomotion are "way, way down the line."

Breazeal is famous for the highly expressive robots she and her students built at the Media Lab, where she directs the Personal Robots Group. So prior to meeting Breazeal and seeing Jibo, I was trying to guess what the robot would look like. Would it have big eyes like Kismet? Fur like Leonardo? A tail like DragonBot?

After seeing Jibo's sleek, clean, Apple-esque industrial design shineness, I asked Breazeal if she considers Jibo a big departure from her previous robots.

She explained that the design choices were deliberate, and part of how she and her team envision bringing personal robots to people's homes. "By keeping it more abstract you're also keeping it more sophisticated. And we want people to think about this not as a toy -- because it's certainly not a toy -- but as this high-end consumer electronics device."

"The core competency of a social robot is its ability to engage people," she adds. "Not only just around information but around social, emotive, interpersonal dimensions. And even through its physical, social embodiment. That's the core competency. is designed to hit that as powerfully as we can with the most elegant, sleek, minimal, sweet spot of that. There's a kind of Occam's razor thing going on here."

So, will people want it? I'd say yes, if Breazeal and her team can deliver a virtually flawless user experience. If Jibo works most of the time but not allthe time -- if you have to keep repeating yourself to be understood, if the robot fails to recognize you, if applications are slow or stall -- this will likely make it a big failure.

In fact, Breazeal says that the biggest technical challenge in developing Jibo is integration. "The sensing, the vision, how it all comes together to create this magical experience when it's just you and your Jibo, that's what the biggest challenge is."

To be sure, if anyone can deliver on a robot like this, it's Breazeal. And she's not alone, having assembled an impressive team with executives and engineers with backgrounds in speech recognition, natural language, user interaction, gaming, and animation.

Will Jibo be a big hit? Will it become "part of the family"? Leave your opinion in the comments below.

Get more from IEEE Spectrum

So Where Are My Robot Servants Cut the Cord: Mobile Robots Deliver Electricity to Your Appliances The Good Life, With Robots This article originally appeared on IEEE Spectrum; all rights reserved.