They're calling drone racing the sport of the future. Better grab a controller. Continue reading →

A lot of offbeat activities have been called "the sport of the future," but for once the moniker actually fits. Professional drone racing pits quadcopter pilots against each other in epic high-speed races.

Grab a controller - it's going to be a wild ride.

Nicholas Horbaczewski, who was previously an executive at the Tough Mudder obstacle course series, founded the Drone Racing League as a way to create exciting new races. He's even got serious investors.

Here's how it works: Each competing pilot wears first person view goggles connected to the drone's camera. They use controllers to maneuver their drones around large, tricky courses, steering from the drone's viewpoint.

The racing drones are standard lightweight quadcopters nearly 10 inches in size that have front-mounted cameras. Everything moves fast: These drones can even hit 120 miles per hour. Slightly larger aerial photography drones also fly around, capturing footage - like spectacular crashes.

In July, top drone pilots from around the world gathered at an abandoned power station near the Hudson River for the League's dicy, obstacle-laden Gates of Hell test event. Last week the League announced the launch of its first official racing circuit, which starts later this month.

"A lot of people who've seen drone racing say it's like a real-life video game," Horbaczewski told The Creators Project. "It's a futuristic moment coming to life."

If you haven't already seen the Drone Racing League trailer, here's what the new sport looks and feels like (and yes, it's all real footage): 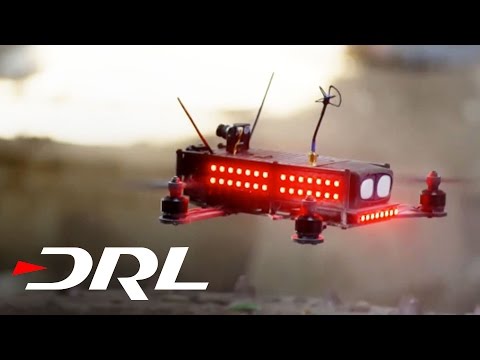 This seems unwise to admit from the middle of Broncos territory, but American football isn't really my thing. Earlier this week I was wishing that the Super Bowl involved life-sized robots on the field instead of human players risking bodily harm. I'd watch the bots in a heartbeat.

Fortunately for diehard football fans, the Drone Racing League kicks off the season well after the Super Bowl. Their season opener took place at the Sun Life Stadium in Florida, where the Dolphins normally play. That first race will air on February 22. Finally, tech nerds get to take over the gridiron.