This is what it feels like to zip through the Kuiper Belt at 31,000 miles per hour.

NASA's New Horizons spacecraft made history when it zipped past Pluto and its system of moons during a hair-raising encounter on July 14, coming within 7,800 miles of the dwarf planet's surface.

PHOTOS: NASA's Mission to Pluto by the Numbers

Now, the mission team has stitched together the observations made by the probe during its historic flyby, creating a stunning high-resolution view of what it looks like to barrel through the Kuiper Belt at 31,000 miles per hour: 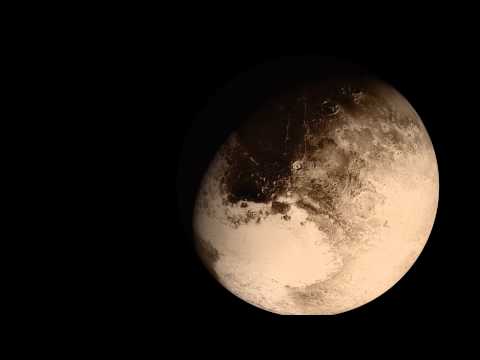 Captured in the video is the long approach to Pluto and its moons, the wonderful high-resolution global view of Pluto during closest approach, and then the ring of scattered sunlight as Pluto blocks the sun from view as a stunning eclipse.

As discussed by research scientist Stuart Robbins, at the Southwest Research Institute in Boulder, Colo., who created this flyby video, to make the animation more cinematically appealing, he had to tweak the timescale between frames.

"The final product goes from one second of movie time equaling 30 hours at the beginning and end, to one second of movie time equaling 30 minutes for the closest-approach section," writes Robbins in a blog post. The approach to Pluto occurred over a long period, whereas the point of close approach was gone in a flash, so Robbins basically hit the slow-mo button when New Horizons buzzed the dwarf plant's surface, but sped up the footage when the spacecraft was far away.

For more details about how this video was achieved, read the New Horizons blog.

Since the days following New Horizons' Pluto flyby, the mission team has not released any more images of Pluto or its moons. After the flurry of post-flyby activity, the spacecraft is currently taking its time downlinking "lower data-rate information collected by the energetic particle, solar wind and space dust instruments," write the mission team on the New Horizons website. More flyby images and other data will be released this month and will continue through the year.

Screenshot from the flyby phase of the recently-released New Horizons video.

After several false starts, NASA in 2001 agreed to fund an independent effort to fly a spacecraft to Pluto, the only member of the solar system’s original nine planets that hadn’t been explored. Five years later, New Horizons blasted off to begin a nearly 3 billion mile journey to Pluto, farther than any probe has traveled since the 1970s-era Pioneer and Voyager spacecraft.

Here’s a look at the New Horizons mission by the numbers.

MORE: From the Start, Pluto was a Puzzle: Timeline

Launching a small spacecraft on a big rocket is one way to get going fast. Slingshotting off giant Jupiter’s gravity is another. New Horizons did both, and still the journey to distant Pluto took nearly 10 years. It is zipping along at about 31,000 mph -- fast enough to fly from New York City to Los Angeles in less than 5 minutes.

Image: Viewed from the top of the Vehicle Assembly Building at Kennedy Space Center, NASA’s New Horizons spacecraft roars off the launch pad aboard an Atlas V rocket on Jan. 19, 2006.

MORE: Once Just a Speck of Light, Pluto About to Be Unveiled

During the encounter, New Horizons will take hundreds of pictures in both visible and near-infrared wavelengths. The best images should depict surface features as small as 200 feet across. With nearly 3 billion miles between New Horizons and Earth, a radio signal, which travels at the speed of light, will take about 4.5 hours to reach Earth.

Image: An artist's impression of Pluto's surface reveals an icy surface -- we're about to find out what Pluto is really made of.

With just one shot to get a close-up view of Pluto, New Horizons is designed to gather as much data as possible, as quickly as possible. In all, scientists expect the spacecraft to collect 100 times more data during closest approach than it can transmit back to Earth just after the encounter. A few high-priority images and data will be sent back just before and after closest approach, but the rest will trickle in over the next 16 months.

Image: Diagram showing the sequence of events during New Horizons' encounter with the Pluto system.

New Horizons draws electricity from a single radioisotope thermoelectric generator, or RTG, which converts heat given off by the natural decay of about 24 pounds of radioactive plutonium. It runs on less power than a pair of 110-watt light bulbs.

Image: Artist's impression of New Horizons flying past Jupiter, with its RTG visible in the lower right of the image.

After its Pluto flyby, New Horizons will continue out into the Kuiper Belt region of the solar system. Scientists hope to extend its mission so it can pass by at least one of the thousands of icy bodies that orbit in this vast domain. Eventually, New Horizons will end up leaving the solar system. It is expected to remain viable until the late 2030s.

MORE: After Pluto, Where Will NASA's New Horizons Go?