A species of cavefish in Thailand has been documented using the same type of gait employed by four-footed creatures such as salamanders.

A species of cavefish in Thailand has been documented walking and climbing waterfalls in a manner similar to four-footed creatures such as salamanders, in a find researchers call "huge" in evolutionary terms.

These Fish Were Made For Walking: Photos

Study co-author Brooke E. Flammang, an assistant professor of biological sciences at NJIT, said in a press release that the fish has anatomical features previously known only in tetrapods - four-limbed vertebrates that include amphibians and reptiles.

"What these fish do, in complete darkness, is stick to the rock and climb waterfalls, completely underwater," Flammang said.

While some other fish species have means of moving on land, the NJIT researchers write that no other living fish has the gait employed by the cavefish, which uses a tetrapod-like, "robust pelvic girdle" to climb.

"The pelvis and vertebral column of this fish allow it to support its body weight against gravity and provide large sites for muscle attachment for walking," Flammang said. 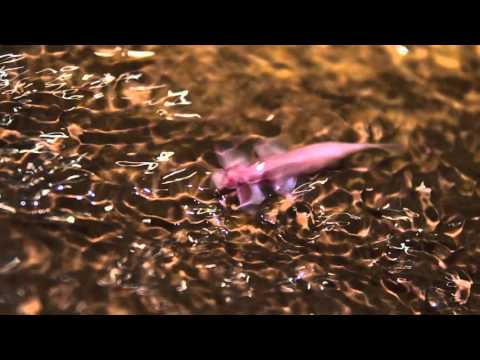 The NJIT team says the find could tell scientists more about how the anatomy for land-walking evolved, as tetrapods made the long transition from finned to limbed beginning in the Devonian period about 420 million years ago.

"From an evolutionary perspective, this is a huge finding," Flammang said. "This is one of the first fish that we have as a living species that acts in a way that we think they must have acted when they evolved from a fluid environment to a terrestrial environment."

This week came distressing news from marine biologists, who reported that there were

only a few dozen

spotted handfish left in a survey of the fish's only known habitat in waters off Tasmania. Spotted handfish (shown above) are small, bottom-dwelling fish that would rather 'walk' on their pectoral and pelvic fins than swim. Their distinctive mode of locomotion alone is worth hoping they can be saved (there is talk now of ramping up a captive breeding program). The critically endangered fish aren't the only ones that enjoy a nice walk, though. Let's sample a few of the other species of fish that like to feel the ground beneath their fins.

Here's a literal fish out of water. Mudskippers are the broad name given to more than three-dozen species of fish that are amphibious, using their fins to motor (or wriggle, really) around on land. Different sizes of mudskipper will venture on land to varying degrees, with the largest ones spending up to 90 percent of their time on land, on the uppermost part of mud flats that only become submerged at high tide. In water, they breathe through gills, like any other fish, but on land they draw oxygen from outsized gill chambers they fill with water before coming ashore. They can also breathe through their skin, but they have to stay wet or very moist to pull that off. They're found in freshwater tidal mud flats in tropic, subtropic and temperate areas of the Indo-Pacific region and Atlantic coast of Africa.

Nudibranches Stand Out In Any Ocean: Photos

Frogfish won't venture onto land any time soon, but they do move across the sea bottom on their fins. They don't generally move much, however, preferring to wait idly until suitable prey comes into view. They dine on crustaceans, other fish, and even --

Epaulette sharks, a species of longtailed carpet shark, are night owls that hang out in shallow waters such as tidal pools and coral reefs. Often times, in lieu of swimming, they will do a kind of walk, using their fins to push themselves along the sea floor.

Flying gurnards, despite their enlarged pectoral fins, can't actually go airborne or even glide for just a bit, but they

use their pelvic fins to "walk" along the bottom while they search out meals of crustaceans and small fish. They live in tropical to warm temperate waters on either side of the Atlantic, from southernmost South America to New England.

Crazy-Looking Microbes From The Ocean: Photos

, sometimes called batfish, can also stroll along the sea floor, using an awkward gait. This red batfish will rest on the sea floor and scoot along just skimming the bottom.

The "walking" species of catfish is, like the mudskipper, able to move across dry land, using its fins for balance and moving in a wriggling, snakelike motion. So long as it stays moist it can keep up its Earth-bound ways. It lives in swamps, ponds, and rivers and can take advantage of its over-land skills when such places dry up. It's native to Southeast Asia.

This little guy is a mangrove rivulus, an amphibious fish that lives in the Atlantic waters from Florida all the way down to Brazil. It's only about 3 inches long (75 millimeters) and it can live for a bit more than two

out of water! It manages this trick by breathing through its skin, while it hides out in tidy places such as fallen logs. And it gets even cooler. On land this little fish fashions long jumps by doing a kind of backflip, tossing its head back over its body in the direction of its tail.