Russian divers set a record for going the deepest underneath ice near the Arctic Circle. Continue reading →

A pair of Russian divers reached a record depth underneath ice just outside the Arctic Circle on Saturday. The frigid temperatures and intense pressure made for extreme conditions.

5 Longest Free Dives of All Time

Maxim Astakhov and Alexander Gubin are professional scuba divers who work for the Russian Geographical Society. Their dive over the weekend was both a record-breaking attempt, and an opportunity to truly put new diving equipment to the test, Russia Today reported.

The duo, saddled with multiple air tanks, reached 102 meters - about 335 feet - under the icy surface of the White Sea just outside the Arctic Circle. The record was confirmed by Bojana Ostojic, a logistics expert who was a longtime member of Jacques Cousteau's team as well as a member of the Russian Geographical Society and a World Underwater Federation associate.

"At a depth of 100 meters my gloves tightened so much it felt like I was going to see my nails," diver Alexander Gubin told Russia Today. "My hands felt terribly cold." No surprise there. The salt keeps that water liquid even though its temperature is actually below freezing, the Guardian pointed out.

While other divers have gone deeper in Antarctica, this 80-minute dive was the deepest one under a hole in ice, according to UPI. Going after cold water records is nothing new for the Russian Geographical Society. In early 2013, their team reached the bottom of Labynkyr Lake in Siberia, one of the coldest lakes on the planet. And last summer their divers reached 111 meters (364 feet) in the Arctic.

For context, Astakhov and Gubin went more than twice the normal depth limit of bottlenose dolphins and qualified divers - to a depth greater than the height of Big Ben, the Guardian's infographic shows. Watch the daring dive here: 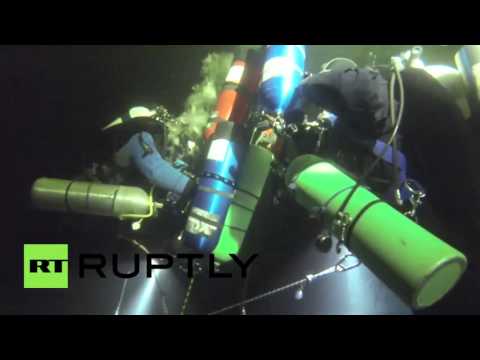 Diving through a hole in thick ice makes a terrifying difference since it can contribute to disorientation underwater. Plus, the pressure and temperature can cause equipment to fail, Atlas Obscura's Jessie Guy-Ryan noted.

Although the Russians appear to be calm in the video amid all the test tanks, things didn't go exactly as planned. The Guardian reported that, after he emerges, one of the divers says his equipment took a while to start working properly in the extreme conditions. Yikes. But clearly a bit of wonky equipment and mind-numbing cold isn't going to slow these guys down.

The sixth year of the Red Bull Cliff Diving World Series stops in the United States this weekend at a new site: Divers will launch from a platform on the precipice of Hell's Gate (above) in Possum Kingdom Lake, Texas. Men will dive from 27 meters, or the height of an eight-story building, and women will jump from 20 meters. At the first stop of the series in Cuba, participants performed five new dives.

The World's 8 Most Grueling Endurance Events

Orlando Duque, who once scored a perfect 10 on a cliff dive, won the first world series in 2009. The format for the competition includes four dives: two simple and two more difficult. The dive pictured here is a simple dive. Like all cliff dives, he'll enter the water feet-first. "Once you get above 20 meters, you can feel the impact get greater and greater with every meter," said American competitor David Colturi. Some have compared the landing to hitting concrete. "If you hit concrete, you wouldn't go through it, but it's just like a really hard force on all your muscles. If you're off line at all, it feels like someone smacked you with a 2 by 4." Entering feet-first is an adjustment for the divers, the mast majority of whom learned how to competed in pools. Duque, of Colombia, is probably the best at entering the water, said Red Bull Cliff Diving’s Sports Director Niki Stajkovic. "He's kind of like a magician when he goes in the water."

This series of frames shows Gary Hunt of the U.K., who won the World Series three years in a row, completing a front double somersault with a half twist in the pike position.   "There are obviously top dogs, but there are a lot of new guys now and you never know who's going to come up next year," Colturi said. "We don't score country points; it's totally individual, so we're all very friendly and coaching and helping each other."

NEWS: Is The Tough Mudder Too Dangerous?

This is Russian Artem Silchenko's signature dive, a flying inward somersault pike.   Although he's the only one to do this dive, he doesn't get to practice it that often. The divers usually train in pools from 10-meter platforms. A dream facility, Colturi said, would have boards of varying heights between 1 and 28 meters. But even if a training facility had a 28-meter platform, the body could only handle a limited number of jumps.

Duque is starting a flying reverse somersault tuck in this photo.   Scoring in cliff diving uses the same criteria as Olympic diving.  "We've created a pool of judges, most of whom have had high-diving backgrounds,' Stajkovic said, including legend Greg Louganis in the Texas competition.   As the dives progress, scores rise. The degree of difficulty has risen from 5.4 in the first year to 6.4 now -- that can be a 25-point difference in a dive.   "The required dives haven't changed much," Stajkovic said. "The big difference is the optional dives, where a lot of the competition is won or lost."

"This was my last and winning dive," Colturi said. "It's a reverse twister. It's currently my favorite dive. I didn't learn it until I had finished normal diving, and I haven't been doing it that long. When you're doing a reverse you're standing forward and flipping backward, and then you're flipping and twisting at the same time. You can see all the boats in the picture. That atmosphere was just incredible, with 20,000 Italians watching. There was so much energy and it was such a beautiful day." The whole dive involves a reverse double somersault and four twists.

This marks the first year women are competing in the event. Anna Bader of Germany, pictured here, won last year's only female competition in Italy. Three Americans are hoping to challenge her, including Ginger Huber, who scored the highest on a single dive in Italy last year.

Blake Aldridge, from the U.K, won the first stop of this year's series in Havana. "That's his flying gainor flip," Colturi said. "He's laying out a big reverse flip. He did it well -- he was consistent there, never getting below about 8.5."

PHOTOS: When Felix Jumped, the World Jumped With Him