Two red dwarfs and their accompanying gas giant were discovered through a microlensing event -- but their true nature could only be confirmed by Hubble.

For the vast majority of exoplanetary discoveries, one or more planets are found orbiting one star. However, there are a few exotic exoplanets orbiting two stars and the Hubble Space Telescope has helped confirm the discovery of a unique star system.

RELATED: Tatooine's Got Nothing On This Star System

Microlensing events are caused when a massive object, like a planet or star, passes in front of a more distant background star. As predicted by Einstein's theory of general relativity, the lensing object will warp spacetime, causing any light passing by to slightly change its path. Should the alignment between distant star, lensing object and Earth be just right, the object can create a spacetime lens -- akin to passing a magnifying lens in front of a candle flame.

The result is a short-lived brightening of the background star. By studying the microlensing event light-curve (i.e. how the brightening fluctuates with time), we can learn many things about the object(s) creating the lens.

But in the case of the 2007 event, the ground-based Optical Gravitational Lensing Experiment (or "OGLE") detected something else in the light-curve that confused matters. This wasn't a single object, it was a whole star system -- with a twist.

RELATED: Distance of a Microlensing Event Measured for the First Time

"A detailed analysis revealed a third lensing body in addition to the star and planet that were quite obvious from the data," said astronomer David Bennett, of NASA's Goddard Space Flight Center, in a statement. 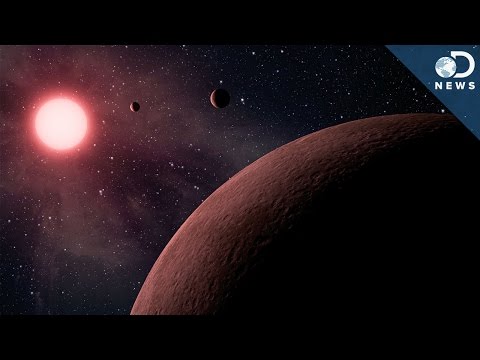 As microlensing events are, by their nature, one-offs, astronomers needed another way to confirm the nature of OGLE-2007-BLG-349 and Hubble has been used to zoom in on the star system that triggered the 2007 brightening.

It turns out that OGLE-2007-BLG-349 was caused by a planet orbiting two stars, both tiny red dwarfs, drifting in front of a more distant bright star. This is the first time a binary system plus single exoplanet has been discovered through microlensing. "We were helped in the analysis by the almost perfect alignment of the foreground binary stars with the background star, which greatly magnified the light and allowed us to see the signal of the two stars," Bennett added.

By combining observational data from OGLE and Hubble, astronomers have been able to work out the nature of the star system, which is located around 8,000 light-years away, to great precision The star system consists of two red dwarfs orbiting one another only 7 million miles apart (as a comparison, this is only 14 times the Earth-moon distance). The gas giant exoplanet orbits the binary red dwarfs at a distance of 300 million miles -- approximately the distance of the solar system's asteroid belt from the sun. The exoplanet would therefore complete one orbit around the binary every seven years.

Interestingly, this is the closest the exoplanet can orbit the binary system before gravitational perturbations would destabilize its orbit.

This discovery provides an important lesson for the detection of these exotic systems. Whereas NASA's Kepler Space Telescope seeks out the transits of exoplanets across the face of their stars, microlensing can detect entire star systems with exoplanets in far-flung orbits, but this can only be done with confirmation from Hubble.

"This discovery, suggests we need to rethink our observing strategy when it comes to stellar binary lensing events,"said co-author Yiannis Tsapras, of the Astronomisches Recheninstitut in Heidelberg, Germany."This is an exciting new discovery for microlensing."