A brain-controlled glove is letting people with paraplegia perform everyday tasks like eating, drinking and signing their name.

Iron Man-style robotic exoskeletons could soon help factory workers and soldiers lift impossibly heavy loads, but there's another type that could have an even more meaningful impact on people's lives.

In a paper published in the journal "Science Robotics" today, neuroscientist Surjo Soekadar and colleagues describe the development of a system that lets people grasp simple objects like a pen, by translating activity in the brain and eye movements into actions. The prototype was tested on six volunteers who had never worked with this kind of technology before, and was successfully tested in everyday environments, like a cafe, outside the lab.

"Most participants were overwhelmed and very excited about the new possibilities that the system provided to them (eating, writing, throwing a dice etc). It gave them an idea of what direct brain-control could mean for them." Soekadar told Seeker in an e-mail.

Participants were asked to wear a cap fitted with electrodes and a robotic glove with actuators connected to a portable control panel. To pick up an object with the glove, the participants thought of grasping. Electrical signals in their brain triggered the glove to pick up the object. 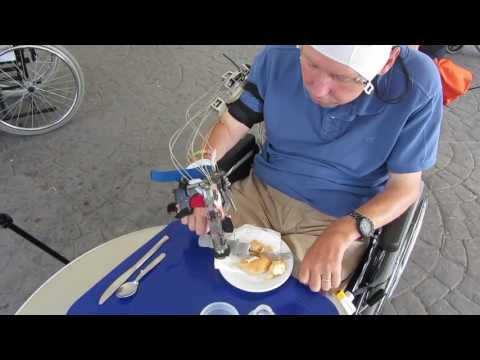 But because the brain signal function was only about 90 percent accurate, the researchers added an eye movement component to make the system more robust. If a person wanted to let go of an object, she moved her eyes to tell the glove to release. That could help avoid accidents, like spilling hot coffee in one's lap, the other 10 percent of the time.

The technology, called a brain machine interface (BMI), has been around for several years, but this one differs from others in that it doesn't require the brain-sensing electrodes to be surgically implanted in the head, a procedure that is not without health risks. Instead, a person wears a EEG cap.

"Next we are planning to make these systems more intelligent and cosmetically less noticeable." Soekadar said. " We particularly aim for systems that users with spinal cord injury or stroke can mount unassisted."

The researchers hope to eventually be able to reduce the visibility of the mechanical parts, potentially by 3-D printing exoskeletons tailored to individual needs. They also want to incorporate components of artificial intelligence like object recognition to the system to make the process even easier.

"Further commercialization depends on the industry's willingness to invest into such technology. After a growing number of clinical studies suggested that repeated use of brain-controlled exoskeletons can trigger neurological recovery, it is conceivable that hundreds of thousands of stroke patients could benefit from such technology." Soekadar said.