This weekend, Musk told a crowd gathered at the Hyperloop test track that he's started digging the hole.

It says something about Musk that most of us weren't sure whether he was joking. He quickly replied to his own tweet: "I am actually going to do this." He mentioned starting "The Boring Company," and added "Tunnels" to his Twitter bio, alongside Tesla, SpaceX and OpenAI.

Now it looks like his plan is forging ahead. Last week, in a series of new tweets, Musk provided a couple new nuggets of information. "Exciting progress on the tunnel front. Plan to start digging in a month or so," he tweeted on Wednesday. When asked where his tunnel would be, Musk responded that it would start "across from my desk at SpaceX. Crenshaw and the 105 Freeway, which is 5 mins from LAX."

"Yup," Musk replied. "And we start digging the tunnel tonight."

Musk also DMed The Verge the same day, saying that without tunnels we'll all be in traffic hell forever. "I really do think tunnels are the key to solving urban gridlock," he told the outlet. "Being stuck in traffic is soul-destroying. Self-driving cars will actually make it worse by making vehicle travel more affordable."

And then on January 27, he tweeted:

Asked publicly about earthquakes, Musk tweeted, "Earthquakes tend to have the biggest effect on the surface, like waves on water. That's why LA can have a (lame, but getting better) subway." For their part, the LA Metro wryly tweeted, "We have a slightly used tunnel boring machine we could sell you in a couple of months. Works like a charm. Hit us up."

Reactions to the tunneling tweets were mixed. Amid all the "boring" puns, some cheered the idea. However, Wired transportation editor Alex Davies called it "misguided nonsense" and a "harebrained scheme." A few Twitter users noted that Musk was tweeting about the tunnel at the same time as Trump was calling for a wall.

Musk's ideas tend to be big. Despite persistent questions about feasibility, he's pushing his Hyperloop transportation concept along. Over the weekend, student teams from around the world gathered at SpaceX in California for the Hyperloop Pod Competition.

"We started digging a hole," Musk told them. "On Crenshaw, in front of SpaceX headquarters, there's a giant hole."

"We're just sort of muddling along. We have no idea what we're doing, let's be clear about that," he said with a small laugh.

For this year's competition, only three Hyperloop teams had pod prototypes strong enough to try out on the track, Business Insider reported. The Delft University of Technology team placed first with a lightweight carbon fiber pod prototype that the team thinks could be scaled up easily. Building Hyperloop tunnels could require creating deep tunnels insanely fast.

The next phase of the Hyperloop competition is planned for this summer. Wonder what Musk's tunnel will be like by then, and who he'll let in. 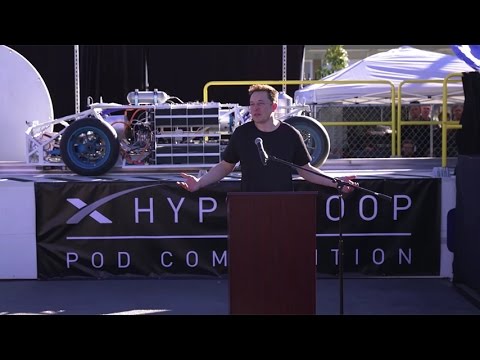