Baby member of the herd likely fell in first, followed by adults trying to save it.

Rescuers in China used helicopters and a digger to free three wild Asian elephants – including one young calf – from a water tank where they were helplessly trapped for more than two days, state media said.

Pictures showed the trio languishing in muddy waters with their trunks raised to breathe inside a concrete basin just a few meters wide, with the baby submerged up to its eyes.

The young elephant probably fell in before the adults tried unsuccessfully to help it out, the official Xinhua news agency cited forestry officials in the southwestern province of Yunnan as saying.

More than a dozen wild elephants soon surrounded the tank, becoming agitated after repeated attempts to pull out their companions using their trunks.

RELATED: Elephants Added to List of Animals That Show Empathy 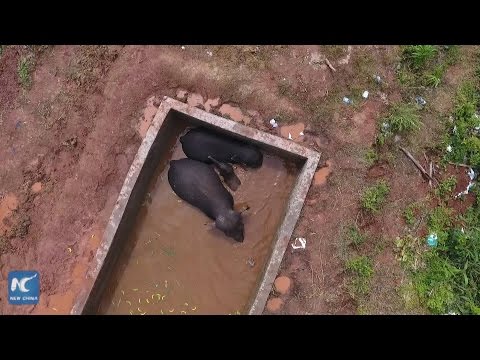 "We were worried that the baby elephant might choke on the water or die from exhaustion," Xinhua cited Xiong Chaoyong, deputy manager of Yunnan's Asian elephant breeding and rescue center as saying.

Rescuers used firecrackers and helicopters to keep the rest of the herd away, giving a digging machine the chance to smash one wall of the tank, providing the pachyderms with an escape route.

The digging process took about a half hour and injured the eye of one of the adults, the Beijing News reported.

The trio trundled away from the site on Tuesday afternoon.

Asian elephants are first-class national protected animals in China, but poaching has caused their numbers to dwindle to about 300 in the wild.