If you thought Snowpocalypse 2016 was bad, be thankful that you weren't along the coast of central Chile. El Niño whipped up a storm in the Pacific Ocean that battered the Chilean resort city of Viña del Mar. The waves rushing into the streets were so powerful that a wall of water actually engulfed a government SUV, overturning it.

The Chilean news website La Tercera reported that the public safety vehicle was driving down Peru Avenue when it was swamped and slammed on its side. Fortunately, the driver managed to escape with only slight injuries and was treated at a local hospital for his bruises, according to the website. 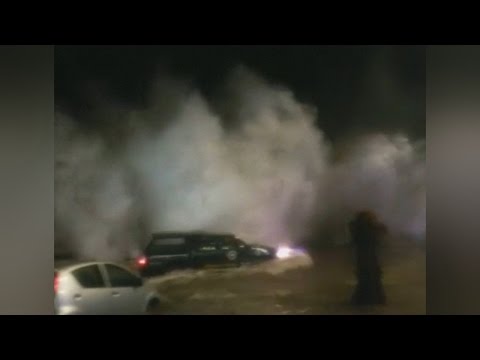 About three feet of water flooded through the city's restaurant and nightclub district, at a time of year when it usually is filled with visitors, the website said.

One witness said that the huge waves dragged other cars as well.

Though the weather has calmed a bit, officials temporarily have banned bathers from the city's beaches.

"In some beaches (tidal waves) have removed a significant percentage of sand and in others it has been incorporated, the concern is for those who have lost sand. Because once the sand is removed you can see debris, irons and other elements that are very dangerous for swimming," Rodrigo Vattuone, the maritime governor of Vaparaiso, told Ahora Noticas.

The extreme weather event also has highlighted an ongoing problem. Like many communities along the Pacific coast of the Americas, Viña del Mar is vulnerable to being flooded by storms, due to rising sea levels and increasingly violent weather caused by climate change. Another article in La Tercera reported that the resort city's seawalls and other infrastructure to protect against such events are inadequate, and need to be augmented. But residents are concerned that beefing up the protection will mar the view of the ocean, which helps to attract tourists.

One engineer has proposed building a submerged wall a few meters away from the beach, which would redirect waves to break before they reach the town.

But Chile isn't the only place being hit with waves. This YouTube video shows a sneaker wave in Oregon that sent locals running for safety.

The winners are in from the National Oceanic and Atmospheric Administration's "Weather in Focus" photo contest, picked from more than 2,000 entries taken between Jan. 1, 2014 and March 31, 2015. "From rainbows and sunsets to lightning and tornadoes, the winning photos aren’t just captivating to look at, but inspire us to look at the world in different ways," said Douglas Hilderbrand, NOAA's contest judge and Weather-Ready Nation Ambassador Lead. "It was difficult to pick winners from so many good entries." In first place, from the category "Science in Action," is "Green Bank Telescope in WV" by Mike Zorger, Falls Church, Va.

Photos: It's the Crazy-Extreme Weather Season

All 16 winning images will be displayed in a

exhibit located on the NOAA campus in Silver Spring, Md., starting in July. Second place in "Science in Action" went to "Photographer captures the aurora" by Christopher Morse, Fairbanks, Alaska.

A second honorable mention was won for "Fire in the Sky over Glacier National Park" by Sashikanth Chintla, North Brunswick, N.J.

Sunsets and Other Sky Wonders

In the category "In the Moment," first place went to "Smoky Mountains" by Elijah Burris, Canton, N.C.

Of course the professionals had their own category. First place was won by Brad Goddard, Orion, Ill., for "Stars behind the storm."

Brad Goddard pretty much cleaned up this category, winning second (and third) place with "A tornado churns up dust in sunset light near Traer, IA."

“Fog rolls in from the ocean on a hot summer day, Belbar, N.J.” by Robert Raia, Toms River, N.J., won honorable mention in the pro category.

To see all of the images on NOAA's website, go here.