Researchers reconstruct the face of Meritamun, a high-status woman who lived 2,000 years ago.

A mysterious woman who lived 2,000 years ago in what today is modern Egypt has been brought back to life by an Australian team of scientists and artists.

Thanks to CT scanning, 3-D printing and other forensic techniques, a team of scientists and artists now know approximately when the woman lived, where she lived, what she ate and why she may have died.

Questions of her history first came up when Ryan Jefferies, curator for the Harry Brookes Allen Museum of Anatomy and Pathology at the University of Melbourne, began to worry that the mummified remains might be decaying from the inside.

Although the remains were preserved in an archival container, the head and face were hidden behind bandages blackened by oil and embalming fluid.

And so Jefferies requested a CT scan.

Luckily the skull was in good condition. But Jefferies soon realized that using the technology could reveal more than just whether the remains were intact.

"The CT scan opened up a whole lot of questions and avenues of enquiry and we realized it was a great forensic and teaching opportunity in collaborative research," Jefferies told the university's publication, Pursuit.

He then teamed up with other experts from the university to investigate the mummy's past, since its gender and story were a complete mystery. Watch the video below to see how the team worked together. 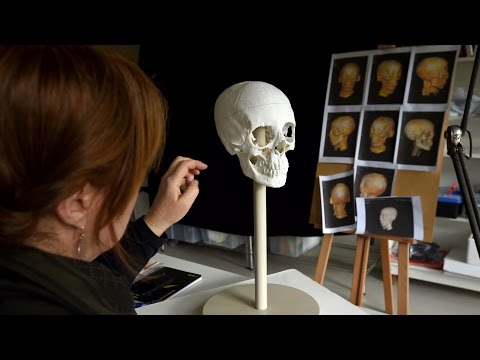 Easly on, Janet Davey, a forensic Egyptologist from Monash University, concluded that the mummy was female, after studying the bone structure imaged by the CT scanner. Anthropologist Caroline Wilkinson from Liverpool John Moores University in the UK who is an expert in facial reconstruction, seconded the finding.

The ancient woman was named Meritamun, which means beloved of the god Amun.

Additional analysis indicated that Meritamun lived in ancient Egypt, stood about 5 feet 4 inches tall and was between the ages of 18 and 25 when she died.

WATCH VIDEO: Who Is the Mystery Mummy Buried in King Tut's Tomb?

In the CT scans, it's clear that Meritamun suffered from two tooth abscesses. The tooth decay could have occurred from eating sugar, which was imported to the region after Alexander the Great's conquest of Egypt in 331BC.

But it could have also come from eating honey.

The fine quality of the linen bandages indicate that Meritamun held a high status and was most likely embalmed during the time of the Pharoahs, before Alexander conquered the area.

For those reasons, Davey thinks the woman lived around 1500 BCE, although the team is still awaiting the results of radio carbon dating to confirm.

RELATED: Did Child Mummy in Italy Open Her Eyes?

Clues in the CT scans reveal that Meritamun may have died from the tooth abscesses. The CT scans also show evidence of anemia, a lack of red blood cells. When people have this condition, the bone marrow swells as it tries to produce more red blood cells and can thin the surround bone, leaving behind pits that are visible after death.

The thin, pitted bone could have also been caused by malaria parasites.

To reconstruct the face, the team used the CT scans to created a 3-D rendering and then printed the skull in two sections.

The video above shows how Mann placed plastic markers at different locations on the skull to mark where tissue might be thicker or thinner, based on Meritamun's age.

The shape of the nose was estimated based on the size of the nasal cavity and the mouth took form based on Meritamun's overbite, revealed in the CT scan.

"It has been a hugely rewarding process to be able to transform the skull from CT data on a screen into a tangible thing that can be handled and examined," said department of anatomy and neuroscience's imaging technician Gavan Mitchell.

For this mysterious woman, a story has come to light.

Photos: Mystery Mummies: Who Are They?

style="text-align: left;">Discovered in 1881 in the Deir el-Bahri Cache above the Mortuary Temple of Hatshepsut and unwrapped by Gaston Maspero in 1886, this mummy, known as CG 61066, was badly damaged by grave robbers in antiquity. The left arm was broken off at the shoulder, the right arm cut off at the elbow and the right leg severed from the body.

style="text-align: left;">Badly damaged by ancient robbers, this mummy had fallen into pieces, the well preserved head broken off, all four limbs detached and the feet severed. The mummy has been identified as that of Thutmosis III, the sixth pharaoh of the Eighteenth Dynasty (reign about 1479–1425 BC) and shares a striking resemblance with Thutmosis II (mummy CG 61066), his purported father.

style="text-align: left;"> The identification is based on the fact that when it was unearthed, the mummy was lying in a coffin bearing in its interior traces of inscriptions made for Thutmosis III. A linen shroud with a funerary book which certainly belonged to Thutmosis III, was possibly placed there by the embalmers.

style="text-align: left;">French excavator Victor Loret found the mummy CG61069 in 1898 in the KV35 tomb in the Valley of the Kings. The mummy was lying in a wooden coffin placed into a stone sarcophagus with inscriptions naming Amenhotep II, the seventh pharaoh of the 18th dynasty of Egypt, who ruled between 1428 and 1397BC. A simple label on the mummy's shroud presented the identity of Amenhotep II.

style="text-align: left;"> Some doubt however remains. The coffin did not give a name and was too large for the mummy. Moreover, the faded hieratic ink inscription could have been easily misread. "With reservations the mummy CG 61069 should be considered as Amenhotep II until proven otherwise," Ruhli and colleagues concluded.

style="text-align: left;">Found in 1898 in the KV 35 tomb, this damaged mummy -- both feet are broken off and the right leg was ripped off at the knee joint -- shows the face of an extremely emaciated man. The body has been identified as Thutmosis IV, the 8th Pharaoh of the 18th dynasty who ruled between 1397 and 1387 BC, thanks to inscriptions on the chest and coffin correctly spelled and clearly visible. According to the researchers, the identification should be considered reliable.

style="text-align: left;">When it was unwrapped in 1905, this mummy revealed a body in rather bad condition. The head was broken off, most of the soft tissue from the face gone, the right leg was cut away from the trunk, and part of the foot missing. The embalmers taped the mummy together in the attempt to restore a lifelike appearance. Bird bones, a human big toe, and parts of an arm were found inside the body cavity. The genetic profiling determined the mummy was the consort of Queen Tjye and as the genetic father of the mummy from tomb KV 55, thus identifying the body as Amenhotep III.

style="text-align: left;">The identity of these exceptionally well-preserved mummies is certain, since the coffins and funerary objects bear their names and status. Genetic testing recognized Yuya and Thuya as King Tut's great-grandparents.

style="text-align: left;">This nameless and naked mummy was found in 1898 in the cachette KV 35 together with the so-called Younger Lady and a teenage boy. The regal quality of mummification and her bent arm recognized her as a queen; speculations were made to identify her as of Tjye, Nefertiti, or Hatshepsut. In view of the genetic test, where she was proved to be the daughter of Yuya and Thuya, the identification as Tjye, wife of King Amenhotep III, appears the most realistic one.

style="text-align: left;">This body, consisting of a completely disarticulated skeleton with few missing part and a damaged skull, was identified as Akhenaton although some argued he could have been the elusive pharaoh Smenkhkare. In the Tutankhamun Family Project he was proved with molecular genetics to be a direct descendant of the "Elder Lady" (Queen Tiye) and mummy CG 61074, commonly regarded as "Amenhotep III," and this would indicate that he was the heretic king Akhenaton.

style="text-align: left;"> The KV 55 mummy was also determined to be the genetic father of Tutankhamun. Inscriptions support the genetics. Not only the body found in KV55 bore golden bands with the name Akhenaton, but inscriptions from Tell el-Amarna, the city of the heretic king, describe King Tut as the son of Akhenaton.

style="text-align: left;">Found by Victor Loret in 1898 in tomb KV35, the mummy was considered to be an unknown royal family member of Amenhotep II, because she was found in his burial. In 1999, Marianne Luban suggested the mummy might be Queen Nefertiti, based on her profile resemblance with the famous Berlin bust. In 2004 Egyptologist Joann Fletcher also proposed the mummy is Nefertiti, relying her theory on portable x-ray, forensic face reconstruction and resemblance between art and mummy. Her identification raised much controversy.

style="text-align: left;"> The DNA analysis revealed the mummy is the mother of Tutankhamun, but did not offer an identity. In their meta-analysis, Rühli and colleagues also present her as Queen Nefertiti. "We can't be fully certain of her identity, however inscriptional evidence and facial resemblance with Tutankhamun as seen in CT scans, strongly suggests the mummy belongs to Nefertiti," Rühli said. "Nefertiti is labelled in inscriptions to be Tutankhamun's mother and indeed the mummy known as the Younger Lady is genetically suggested to be King Tut's mother," he added.