Floating wind farms have the capacity to produce vast amounts of clean energy, if the cost of generating electricity far offshore can be reduced.

The world’s first floating wind farm launched off the coast of Scotland on Wednesday, marking the dawn of a new form of clean energy.

Floating wind farms have the advantage of being able to be placed farther out in deep water than traditional offshore wind turbines, which must stand on bases lodged firmly into the seafloor.

That means floating wind farms have the potential to cover vastly more surface area in windier areas than fixed-based designs and produce tremendous amounts of power so long as developers can keep costs competitive with other sources of electricity.

“Hywind will provide clean energy to over twenty thousand homes and will help us meet our ambitious climate change targets,” said Nicola Sturgeon, First Minister of Scotland, at the opening.

The turbines themselves are massive. Each measures 253 meters tall, with 78 meters below sea surface and 175 meters from the surface to the top-most outstretched blade. The rotors are 154 meters in diameter, and each weighs nearly 12,000 tons. 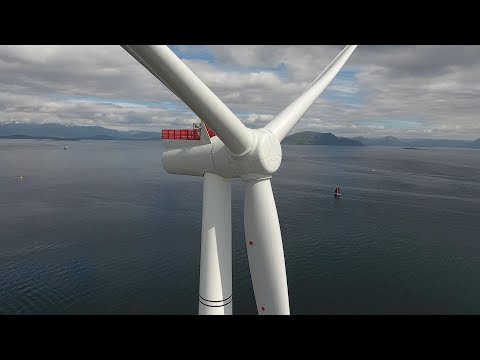 Huge suction anchors secure the turbines to the seabed by flexible cables. Each anchor is five meters in diameter and 16 meters tall.

“Hywind can be used for water depths up to 800 meters, thus opening up areas that so far have been inaccessible for offshore wind,” said Executive Vice President of New Energy Solutions at Statoil Irene Rummelhoff. “Through their government's support to develop the Hywind Scotland project, the UK and Scotland are now at the forefront of the development of this exciting new technology.”

The floating turbine technology was first conceptualized in 2001 and a scale-model was used to model-test the concept in 2005 in Trondheim, Norway. The world´s first floating full-scale wind turbine was installed in 2009 in the North Sea.

RELATED: Floating Wind Farms in the North Atlantic Could Power the World

Earlier this month, scientists in California published research showing floating wind farms in the North Atlantic could generate enough electricity to power the entire world if the cost could be reduced to the point where generating electricity in the middle of the ocean became economically viable.

Floating deepwater wind farms in the North Atlantic would produce more electricity than land-based structures because the individual turbines wouldn’t interfere with each other in the way they do on shore, according to the paper, published by researchers at the Carnegie Institution for Science.

Wind farms in some parts of the North Atlantic could produce three times as much power as land-based sites, the study found, thanks to the peculiarities of weather patterns over the open ocean. Even the smallest floating wind farm considered in the study — with a footprint of 70,000 square kilometers — could provide all of America’s electricity for 10 months every year.

In a statement, Statoil expressed optimism that the technological challenges could be met.

“In recent years, there have been significant cost reductions in both the onshore and bottom fixed offshore wind sectors,” Statoil said. “Floating wind is expected to follow a similar downward trajectory over the next decade, making it cost competitive with other renewable energy sources.”