The obstacle to transitioning away from fossil fuels is more a matter of political will than technical limitations, a new Stanford study suggests.

The world could almost completely convert to renewable electric power in time to head off the worst effects of climate change, according to a new analysis led by a Stanford University professor. And, the study suggests, ditching fossil fuels is not only possible, but might be a net plus economically.

Following up on an earlier study arguing that the United States could be powered by wind turbines, hydroelectric dams, and solar power by mid-century, Mark Jacobson projects that 139 of the world’s nearly 200 countries could run entirely on renewables by 2050. Phasing out fossil fuels in little more than 30 years will require a massive chunk of money, but would pay for itself in energy savings, better health, and limiting the expected losses due to carbon-driven climate change.

“Technically and economically, it’s feasible,” said Jacobson, a professor of civil and environmental engineering with a background in atmospheric science and energy. “We have 98 percent of all the technology needed. Those are existing. And the ones that are not existing, there are prototypes available.”

Technologies that would still need to be developed include the use of high-powered electrical motors for aircraft and commercial ships, driven either by hydrogen fuel cells or a combination of battery-electric and fuel cell technology. But Jacobson said the main obstacles to his vision “are more social and political.”

The new analysis by Jacobson and more than two dozen co-authors was published Wednesday in Joule, a new research journal focusing on sustainable energy. In addition to the 15-page study, a 186-page package of supplemental material lays out projected demand scenarios and timetables for transitioning different sectors.

It’s an ambitious plan, calling for the build-out of “smart” electrical grids immediately; an end to new coal, natural gas, or nuclear power plant construction by 2020, along with the conversion of all heating, cooking, and other appliances to electricity by the same point. The last fossil fuel-powered industrial furnaces would be built by 2025, the last internal combustion-driven trucks would roll off the line by 2030, and all new aircraft would be electrically powered by 2040.

RELATED: Powering America on Renewable Energy Alone May Be Harder Than Anticipated

The estimated price tag for all that runs to nearly $125 trillion worldwide — about 3.5 percent of the world’s annual economic output over the next 30-plus years, Jacobson said. That’s a share comparable to the American auto industry’s contribution to the US economy.

Jacobson’s previous study of a US conversion to renewables came under fire earlier this year from other scholars, who called it far too optimistic unless it included nuclear power and some limited fossil-fuel capability combined with technology to capture its carbon emissions. But he said his conclusions are buttressed by two dozen other studies “that have found it’s possible to keep the grid stable without fossil fuels or nuclear power.”

And Jacobson said the transition will result in a lower cost of electricity and reduced demand. Producing and shipping fossil fuels are energy-intensive. Electric car motors deliver a far bigger share of their power to the wheels than gas-burners do. And the efficiency of electrical devices is expected to improve. All told, Jacobson and his colleagues estimate going electric would reduce power demand by more than 42 percent.

RELATED: The Twilight of American Coal and the Rise of Renewables

While the conversion could cost nearly 25 million jobs in today’s industries across those 139 countries, he said the net result would be an increase of more than 24 million permanent, full-time jobs. Countries that depend more on fossil fuel production — the oil exporters of the Middle East, for instance — might bear the brunt of the losses, but they can recover by retooling their economies toward new technologies associated with renewables. And in countries that are still developing their electrical system and extending the benefits of power to their population, there’s no old infrastructure to replace.

“It’s the equivalent of remodeling versus building a new house,” Jacobson said. “Certainly, things can be cleaner and more efficiently done and you can save more money if you’re starting from scratch, rather than having the cost of removing something old.” 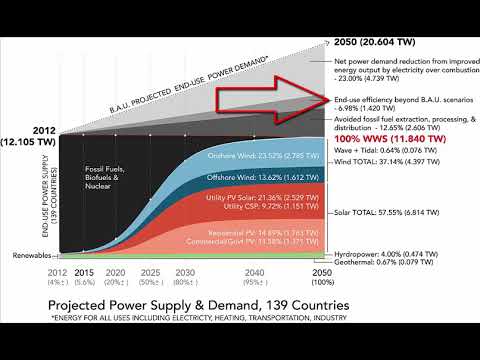 In this video, Mark Z. Jacobson explains the energy transition timeline for 139 countries to 100 percent wind, water, and solar for all purposes by 2050.