We've Made 9.1 Billion Tons of Plastic and Have Recycled Almost None of It

In a first-of-its-kind study, US researchers found that four-fifths of the plastics produced since 1950 has been tossed in places like roadsides, landfills, and the world's oceans.

Ever wonder what happened to those old plastic toys? That cool rayon blouse? All those pudding cups?

They’re probably piled up in a landfill somewhere – or worse.

Despite years of efforts to promote recycling, most of the world’s plastics have ended up in landfills or as litter, US researchers reported today. In what’s billed as the first worldwide accounting of mass-produced plastics, the researchers found more than 9.1 billion tons of the stuff has been produced in the last six decades — and roughly four-fifths of that has been junked.

By 2015, about 7 billion of that 9.1 billion tons ended up as waste. About 9 percent was recycled and about 12 percent was burned; the rest has been tossed. In 1960, plastic made up about 1 percent of the trash in city landfills in industrialized countries; by 2005, that figure had grown to about 10 percent.

If current trends continue, the world will end up with 13 billion tons —  the equivalent of about 30,000 fully loaded supertankers — of the stuff by 2050. The findings were published Wednesday in the research journal Science Advances.

The estimate was compiled using records of European plastics manufacturers, who kept records of global trends in the industry, said Roland Geyer, an industrial ecologist at the University of California, Santa Barbara. The numbers include everything from polyester shirts and children’s blocks to building materials that are expected to last decades.

“We managed to get the data going all the way back to 1950, which is essentially when mass production of modern plastics began,” said Geyer, the lead author of the new research.

The biggest chunk of today’s plastics are in disposable packaging, like the ubiquitous water bottle. They make up about 40 percent of non-fiber plastics, Geyer said.

“It’s by far the largest consuming sector, which of course means that packaging then becomes plastic waste rather quickly,” he said. And while recycling rates have improved in recent years, it’s “still disappointingly low” at around 15 percent.

“Plastics recycling is very challenging economically and technically,” Geyer said. Since plastics are produced largely from petroleum, they get cheaper when oil prices are down, making recycled plastic less competitive.

“Whenever fossil fuels are cheap, recycled plastics have a hard time competing economically,” he said. “It’s also a challenge because in order to get high-quality secondary plastics, you need to separate all the different polymers and make sure it doesn’t get contaminated.”

RELATED: The Arctic Ocean May Soon Have Its Very Own ‘Garbage Patch’

While plastics are durable and lightweight, nearly all commercial plastics are non-biodegradable — meaning they remain in the environment for decades before breaking down. Plastic waste is everywhere, collecting on roadsides and in ocean gyres. Fish and birds are eating the stuff, and one 2016 study projected the seas may hold more plastic than fish by mid-century.

Geyer said the findings “tell me that we need all tools in the sustainable materials management toolbox” to get a handle on the problem.

“We do need to recycle. We need to consider waste-to-energy technologies, like is done quite a lot in Europe and China,” he said. “But it also points to an opportunity to just use less plastic. Any plastic that never gets produced does not need to be discarded.” 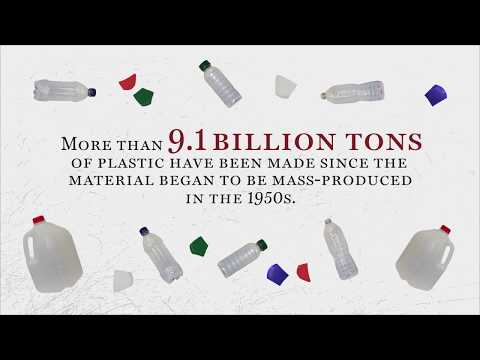