Streams of Meltwater Are Running Across Antarctica

The rivers are as long as 50 miles, and could exacerbate the deterioration of ice shelves that's already occurring due to warming ocean temperatures.&nbsp;

Researchers have found streams of water running across Antarctica, even in the perpetual deep freeze near the South Pole — a discovery that could be trouble for some of the ice shelves on the continent’s rim.

Explorers have reported pools of liquid water as far back Ernest Shackleton’s 1909 expedition to Antarctica. But by compiling aircraft and satellite photos dating back to the 1940s, researchers at Columbia University in New York and Britain’s Sheffield University have found melted ice flowing in channels as far as 85 degrees south.

“What is really surprising is that there is actually enough of those pockets of water, and melting actually occurs often enough, that these large drainage systems can be maintained,” said Jonathan Kingslake, a Columbia glaciologist who led the study. “They’re not only small pockets of water, but there’s streams moving that water up to 70 kilometers.”

The researchers detailed their findings in a pair of papers in the journal Nature.

Average temperatures in the Antarctic interior run more than 50 degrees below zero Celsius (-70 degrees Fahrenheit). But patches of rock that stick up above the ice sheets absorb the sun’s rays, melting the surrounding ice and starting that water flowing downhill, the researchers found. So-called blue ice, which reflects less sunlight than the surrounding snow, can also start to melt.

That water starts flowing into a network of hundreds of streams, eventually collecting in pools that can stretch as long as 80 kilometers (50 miles). And that water can damage the ice shelves that fringe Antarctica, deepening crevasses and weakening those structures. “The water collects in ponds and basically acts like a jackhammer,” said Robin Bell, another glaciologist at Columbia’s Lamont-Doherty Earth Observatory. 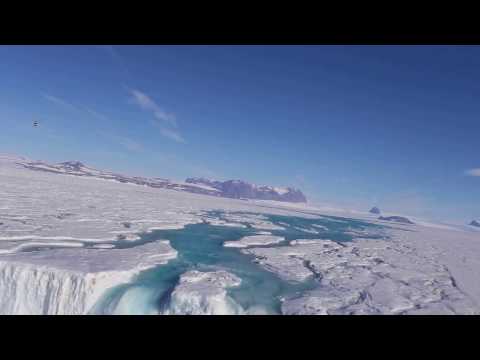 As global temperatures rise, more meltwater is likely to collect atop those shelves, putting more pressure on huge sheets of ice that are already being eaten away from underneath by warmer ocean water. The 1,200-square-mile Larsen B ice shelf broke apart in 2002, and scientists have been watching a huge crack spread across the Delaware-sized Larsen C shelf for the past year.

Those breakups have little effect on sea level: “That ice cube is already in the water,” as Bell puts it. But when they disintegrate, they make it easier for ice from glaciers to flow off the continent. And at the Nansen ice shelf, on the continent’s east coast, the river of runoff these studies documented is pouring over the side in a 130-meter (400-foot) waterfall.

RELATED: Despite Debate, Estimates of Humanity’s Impact on Climate Change Are Accurate

Those effects will have to be worked into computer models of future sea-level rise, said Bell, who was the lead author of a paper that focused on the Nansen shelf.

Antarctica is now regularly crisscrossed by satellites. But the gaps in earlier coverage mean the researchers are almost certain to have missed other drainage systems, Kingslake said — and more study will be needed to determine how they might affect sea levels.

“Melt rates are predicted to increase this century all around the periphery of Antarctica,” he said. “These drainage systems will grow in response to that, and we don’t know how that will impact the ice shelves. That’s a really big area of research.”