Oceans are absorbing the extra heat from greenhouse gas emissions in the atmosphere, and that’s giving tropical cyclones a boost of energy.

Hurricane Maria has been ripping across the Caribbean islands since Monday, when it ballooned into a Category 5 storm. It slammed squarely into Puerto Rico early Wednesday, falling to a Category 2 in the process, but is expected to regain strength once back over water.

It’s the second storm to become a top-scale hurricane this month. Hurricane Irma scoured some of the same islands less than two weeks ago before hitting Cuba and Florida, leaving nearly 80 known dead.

This year also has seen two storms, Harvey and Jose, which peaked at Category 4 with top winds over 130 mph (208 kmh). Harvey hit the Texas coast south of Houston, dumping 50 inches of rain on the fourth-largest US city and the heart of the American petrochemical industry. State officials blamed another 80-plus deaths on that storm.

That’s what scientists expect in a warming climate — but separating out the climate signal from the seasonal noise is tougher to do.

Hurricanes feed on warm water, and warmer oceans give them more fuel as they develop. By the end of the 21st century, the National Oceanic and Atmospheric Administration says it expects storms to be up to 11 percent more intense.

“We don’t see any more hurricanes, in total numbers,” Katharine Hayhoe, a climate scientist at Texas Tech, told Seeker. “But the hurricanes that we get, we expect to see, on average, stronger ones … Not every single hurricane is always going to be one or two categories higher than it would have been, but on average, we’re going to see an uptick in the more extreme categories.” 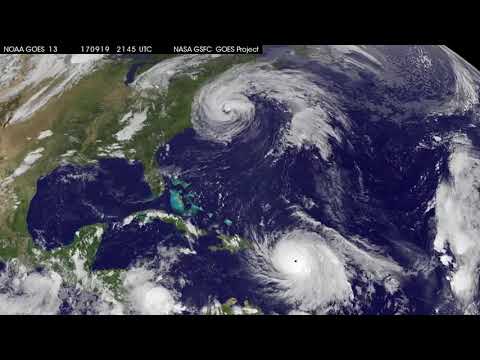 And the 21st century has seen three years with more than one Category 5 storm, including the 2005 season that spawned four Cat 5s: Emily, Rita, Wilma and Katrina, which killed more than 1,800 people and left most of New Orleans underwater. None of those maintained that strength at landfall, however: The last hurricane to hit the US mainland at top strength was Andrew, which devastated the Miami area in 1992.

By comparison, only three years in the 20th century were known to have had more than one Category 5. But Bell said it’s hard to draw conclusions from that relatively short record, particularly since comprehensive hurricane data is a relatively recent development.

In the early 20th century, major storms might have gone unnoticed if they didn’t hit land or cross common shipping lanes, and mariners tended to steer clear of them. And it’s still not clear what effect climate change will have on other ingredients of a hurricane.

“I think it’s still a little too early to say whether this is the start of a trend or just part of a natural cycle,” he said.

About 90 percent of the extra heat being trapped by greenhouse gases in the atmosphere is being absorbed by the oceans, Hayhoe said — meaning there’s more energy available to a building storm. It would be a surprise if that didn’t produce bigger storms, but it will take much more data to confirm that suspicion, she said.

“To really mark a climate trend, we have to have good data over a really long period of time. We’re talking multiple decades, not this one decade or even two,” Hayhoe said.

Scientists are also seeing signs that hurricanes are intensifying more rapidly. One 2012 study found that storms are growing from minimal hurricanes to major ones an average of 9 hours faster than they did a quarter-century ago, Hayhoe said. And since warmer air can carry more water vapor, storms also are expected to dump more rain as they hit.

“We have seen increases in heavy precipitation, not just across the US but around the world,” Hayhoe said. “And these observed increases in precipitation have been formally attributed to human-induced change.”

RELATED: Here’s How Much Better Hurricane Forecasts Are Today Than Decades Ago

Not only are future storms likely to be not only bigger, but wetter — and rising sea levels mean the storm surges that accompany those hurricanes can reach further inland than they would have before.

In the US Southeast, sea levels have been rising faster than the global average already, said Arnoldo Valle-Levinson, a professor of civil and coastal engineering at the University of Florida. And when Irma hit the state, “It is clear that the higher sea levels worsened the damage,” he said.

“Even though we're talking about a sea-level increase of 4-5 inches in the last five years, that is enough to make a big difference between flooding or not,” Valle-Levinson said.

Though Irma faded before it hit Florida, it broke a string of records on its way across the Atlantic, according to CSU. It was the strongest storm generated outside the Caribbean Sea or the Gulf of Mexico, and held its top winds of 185 mph for more than a day and half — longer than any tropical cyclone on record. That speed fell short of the all-time mark set by 1980’s Hurricane Allen, but tied for second in the record books with three earlier storms.

Its sheer size meant cities far from the eye felt its effects: Charleston, South Carolina, found downtown streets awash, while offshore winds on the opposite side of the storm pushed water out of Alabama's Mobile Bay – 500 miles away.

RELATED: A ‘Hot Spot’ for Sea Level Rise Whips Up Trouble in the Southeast

CSU observers forecast a busier-than-average hurricane season, with 16 named storms. So far, with 13 named storms, seven of which turned into hurricanes and four became major hurricanes, “It’s certainly in that category,” said Bell, who co-authored that forecast. And with more people living on the coasts, those storms are causing more damage than they used to.

“Even if we have the same intensity of storms continuing into the future, the more houses and the more expensive property we put in those areas, the more likely we are to see some damage,” he said. “I think we need to be smart about our building codes and urban planning, regardless of whether the storms get more intense or more or less frequent.”

WATCH: How Do We Know When Hurricanes Are Coming?