Rising global temperatures are melting areas of permafrost that hold enormous stores of planet warming gases — but the risk of a doomsday methane bomb remains low.

Locked into the chilly soil of the Northern Hemisphere’s high latitudes are vast stockpiles of carbon compounds.

An estimated 1,400 billion tons of carbon is believed to be resting in the Arctic permafrost — decades worth of today’s human-generated greenhouse emissions. If it stays frozen, it goes nowhere.

But if it thaws, it can start to decompose as bacteria start to munch on it. And that could unlock those compounds, adding them to an atmosphere already warming up due to heat-trapping emissions like carbon dioxide or methane, which punches above its weight as a greenhouse gas.

A swift, massive release of methane is one of the nightmare scenarios of climate change: A feedback loop that accelerates warming, bringing on consequences like rising sea levels and changes to farmland before people or other species can adapt. But don’t panic: Scientists who have studied the soil of the far North say while that “methane bomb” scenario is possible, it’s unlikely — at least for now.

“The bomb is maybe there, but it will not explode anytime soon,” said Vladimir Romanovsky, a geophysicist who studies permafrost at the University of Alaska in Fairbanks.

Methane is the second most-common greenhouse gas, making up about 15 percent of global emissions. It lingers in the atmosphere a far shorter time than carbon dioxide, but packs more than 80 times the heat-trapping potential during that lifespan.

The Arctic is already warming at roughly double the rate of the rest of the globe. A nearly 40-year record of data from the region “shows clearly and no doubt that permafrost is increasing in temperature, and this increase is very significant,” Romanovsky said. That increase is sharpest on Alaska’s North Slope, where average temperatures a meter (2.35 feet) below ground have gone up 5 degrees Celsius (9 degrees Fahrenheit). At 20 meters down, temperatures have still risen about 3°C, he said.

That leaves the near-surface temperatures about 3°C below freezing. And if it crosses that threshold — which might happen by the middle of the century — the thawing and decomposition of organic matter will result in the release of greenhouse gases, he said. That is likely to include methane, particularly in wetter areas, “but the amount of it is still small compared to CO2,” Romanovsky said.

“It probably shouldn’t happen within the next few decades. But the farther you go into the future, the probability increases,” he said.

Methane is already seeping out from underground in some spots. Romanovsky’s colleagues have documented methane bubbles frozen into the ice atop lakes and made videos of themselves setting methane plumes aflame. Eruptions of methane released from thawing underground ice are suspected in the emergence of craters across Siberia’s Yamal Peninsula, home to a major Russian natural gas operation.

The chances of a widespread release of carbon compounds from the tundra might be offset by other effects of climate change, such as increased plant growth in the warming region. But it’s not certain that will happen consistently enough to make a big difference, Romanovsky said. 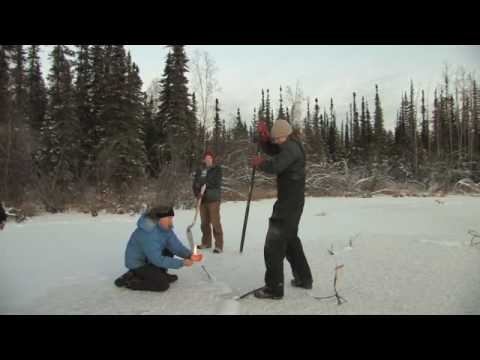 Katey Walter Anthony, a Water and Environmental Resource Center Researcher at the Univeristy of Alaska Fairbanks, fires off a plume of methane from a local Fairbanks pond in November 2009. The methane lies trapped within the ice and seeps from thermokarst lake sediments below.

The methane bomb scenario got a new boost into the public eye after being featured in a hotly debated New York magazine article on climate change, which argued that without sharp cuts in planet-warming carbon emissions, parts of the Earth “will likely become close to uninhabitable” by the end of this century. A methane feedback was only one float in the parade of horribles outlined in the article, which has come under fire from several prominent climate scientists as being too alarmist.

A 2014 study led by the National Snow and Ice Data Center in Colorado estimated that unless humans curb their emissions of carbon dioxide, methane, and other greenhouses gases, a widespread release of carbon trapped in permafrost around the globe could increase the resulting warming by about 8 percent — adding slightly over a third of a degree to a 4-5°C increase by 2100. If emissions are reined to the point that warming can be held down close to the 2°C goal of the Paris climate accord, that increase might be around a tenth of a degree.

However, the study adds that the bulk of the resulting emissions are likely to occur after 2100 — which could push the planet beyond the Paris target. And other studies have shown that more temperate soils can also give up more greenhouse emissions when warmed.

But how much more? That question may yield some encouraging news.

RELATED: Climate Change Is Projected to Worsen Inequality in the United States

Joel Kostka, a microbiologist at Georgia Tech, is part of a team from several universities that has set up an experiment station in northern Minnesota to study just that question. The not-quite-frozen peat bogs found in those regions are also huge carbon sinks, so Kostka and his colleagues have tried to simulate what happens to that peat when it’s warmed to various temperatures. The results to date suggest the soil may not give up its carbon so easily.

“The predominance of our data shows most of that methane is coming from the surface soils,” Kostka said. That’s “relatively recent” carbon, “not the ancient carbon that we are more concerned about.” That’s held up since the team published its first round of findings in December, he said.

“We still think we’re not seeing evidence of that deep, ancient carbon being released as CO2 or methane,” he said.

The far North’s carbon stores also extend into the ocean, on continental shelves that were above water during the last ice age and in the deep ocean floor, and scientists have been watching closely for any signs that warming is freeing methane that’s currently trapped in ice crystals known as hydrates.

But Carolyn Ruppel, a research geophysicist at the US Geological Survey, said methane that escapes the deep Arctic Ocean isn’t likely to reach the surface. Instead, it gets dissolved into the water and eaten by subsea microbes. The catch is, the byproducts of that digestion include carbon dioxide, which makes the oceans more acidic.

And so far on land, it’s not clear whether methane or carbon dioxide would become a bigger source of emissions under future warming scenarios, said Ruppel, who leads the USGS gas hydrates research project. The world has a bigger problem in the emissions that humans pump out every day, she said.

“The bottom line is in reality, the anthropogenic CO2 emissions are far, far more important in the atmosphere than methane, even though the methane is a very potent greenhouse gas,” she said.

WATCH: A Rare Inside View of the Arctic Doomsday Seed Vault