Scientists have combined light-harvesting semiconductors with a catalytic bacterium to efficiently convert light, water, and carbon dioxide into chemicals.

In nature, plants use photosynthesis to convert sunlight into chemicals and energy. But this process is actually not very efficient because chlorophyll, the pigment that makes photosynthesis possible, only responds to one wavelength of light.

Now scientists have devised a way to take the light-harvesting efficiency of a semiconductor that can absorb more wavelengths of sunlight and combine it with the catalytic power of a bacterium to more efficiently convert light, water, and carbon dioxide (CO2) into chemicals, which can in turn be used to develop fuels, polymers, and pharmaceuticals.

The combination is described as a form of “cyborg bacteria.”

“The best path forward is to take the best of both worlds,” chemist Kelsey K. Sakimoto told Seeker. He began researching this organism in Peidong Yang’s lab at the University of California, Berkeley, and is now a post-doctoral fellow at Harvard University.

“With a higher efficiency light harvester you can begin to outcompete natural photosynthesis,” Sakimoto said.

To convert CO2 into products, researchers can produce very complex items in a simple way that chemists can’t even begin to think about doing with conventional chemistry.

The research team will present its findings today at the 254th National Meeting & Exposition of the American Chemical Society (ACS). 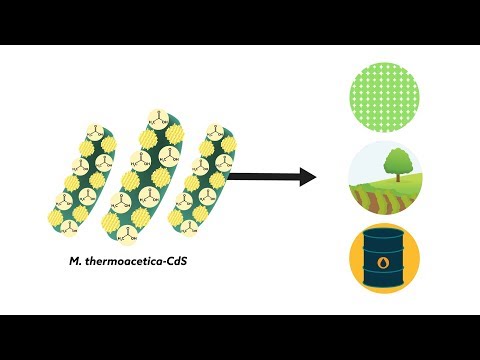 The team’s work focuses on the bacterium Moorella thermoacetica, which can be found in soil and at the bottom of stagnant ponds. As part of its normal respiration, it naturally uses hydrogen to turn CO2 into acetic acid, a versatile chemical that can form the basis of fuels and plastics that are otherwise derived from petrochemicals.

Moorella thermoacetica has another attribute that makes it ideal for this purpose: When it encounters the toxic metal cadmium in the environment, it turns it into tiny particles of cadmium sulfide on its outer cell wall so that it doesn’t get inside, where it can be harmful.

“It's basically a stress response that they have on the back burner if they encounter these conditions,” said Sakimoto. “So we tap this stress response and induce it by adding some cadmium.”

The bacterium uses the cadmium sulfide like a piece of equipment that absorbs sunlight and transfers that energy to produce a molecule that the bacteria can eat. In doing so, CO2 is turned into acetic acid.

An advantage of using this bacteria to produce acetic acid is that chemists can make large amounts of it relatively simply.

“One of the reasons we opted for a free-living system in which the semiconductors are directly attached to the bacteria is that you can make giant vats of this stuff and [the bacteria] will kind of chug along happily like micro algae,” Sakimoto remarked.

In these quantities, it’s easier and cheaper to expose the bacteria to cadmium rather than hydrogen, which would require an expensive, energy-intensive system called an electrolysis reactor.

“The nanoparticles accomplish all of that in a single step,” said Sakimoto. “Having the microbes make all the equipment itself simplifies the process even further.”

In vats under the sun, the bacteria would self-replicate without producing waste.

The acetate produced would then be harnessed to make other products. Previous researchers have shown that genetically engineered E. coli bacteria can turn acetic acid into fuels, such as butanol, as well as into biopolymers to make plastics and into various compounds that are useful in a variety of pharmaceuticals.

Sakimoto believes it’s worthwhile to do some “bioprospecting” for other examples of bacteria that could be tapped to create chemicals. The fact that Moorella thermoacetica produced cadmium sulfide nanoparticles as a stress response was documented as a curious observation in a paper, he said — it was essentially a side note.

“The first, easiest step is to go back and look through the old biological and microbiological literature with the lens of a chemist or a material chemist to see what has been already discovered that other fields of science haven't really found a use,” he said.

It may also be fruitful to visit unusual places out in the field, such as waste processing plants or battery recycling plants, where bacteria have learned to adapt to unusual conditions.

“I think bio-prospecting will call for us chemists and biologists to go look into unusual environments,” Sakimoto explained, “potentially manmade environments where we have very different chemical compositions, to search for organisms that are adapted to or have found ways to live with unusual metals that you find in chemical laboratories, but are not widely available in most of the natural world.”