Whales Only Recently Evolved Into Giants

The early ancestors of 100-foot-long blue whales were dolphin-sized, according to new research that explains how they and other whale giants got to be so big.

Gigantism seems like a past phenomenon, given that enormous animals such as Megalodon and Tyrannosaurus rex died out millions of years ago. The largest vertebrate that has ever lived, however, is part of the present, and not past, animal kingdom. The distinction goes to the blue whale, which can reach lengths of over 100 feet.

Blue whales use baleen — a filter-feeder system inside the mouth — to obtain massive amounts of prey from ocean water. The oldest members of the baleen-whale lineage appeared about 36 million years ago, yet new research published in the Proceedings of the Royal Society B finds that very large members of this lineage only appear at around 2–3 million years ago, which is a drop in the evolutionary bucket.

“What makes our study unique and important is that it’s the first one to explain how, when, and why baleen whales got so big,” said senior author Nicholas Pysenson, curator of fossil marine mammals at the Smithsonian’s National Museum of Natural History.

The museum houses the largest and most diverse skull collections for both living and extinct baleen whales, such that Pyenson recently was able to establish that the width of a whale’s skull is a good indicator of its overall body size. 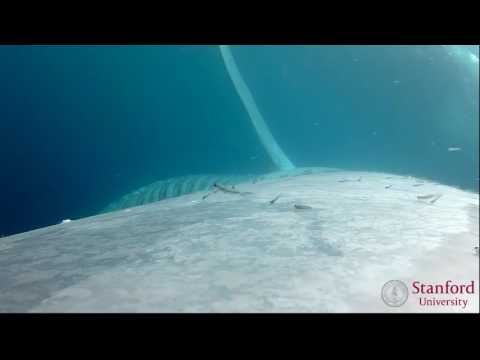 Video shot from a data tag affixed to the back of a blue whale as the marine mammal engulfs krill off the coast of California.

“Every time that filter-feeding has evolved in vertebrate animals, they tend to get bigger,” Slater said. “Whale sharks and basking sharks are bigger than all other sharks. And filter-feeding fish in the Mesozoic were some of the biggest bony fishes to have ever lived.”

Co-author Jeremy Goldbogen of Stanford University’s Hopkins Marine Station shared that large body size in filter-feeders can enable more efficient metabolism and cheaper “cost of transport,” which essentially is the biological version of the miles-per-gallon metric for automobiles. It characterizes how much energy it takes to move a given distance.

“Larger (marine) animals have lower costs of transport, and this makes transoceanic migrations easier,” he added.

The researchers theorize that when ice sheets began to cover the Northern Hemisphere at the start of the Ice Age, run off from the new ice caps would have washed nutrients into coastal waters at certain times of the year. This would have seasonally boosted food supplies.

With that in mind, Pyenson and his colleagues used skull measurements to estimate the length of 63 extinct whale species, some of which lived more than 30 million years ago. The resulting information, together with data on 13 species of modern whales, enabled the team to chart whale sizes and growth patterns over the years.

Lead author Graham Slater of the University of Chicago said that existent gigantic whale species “all evolved very rapidly sometime within the past 4.5 million years and — this is the big thing — they all did it independently. In other words, big whales don’t come from a single big ancestor, but they each come from a much smaller ancestor.”

Pyenson explained that the earliest ancestor of baleen whales was probably about the size of today’s bottlenose dolphins. These dolphins grow to about 8 feet long, demonstrating that blue whales can now grow 12 times larger than their earliest ancestor did.

As for why baleen whales are so big, filter-feeding provides one clue to the answer.

Baleen whales that filter small prey, such as krill, out of seawater were then well-equipped to take advantage of these dense patches of food. As the marine mammals’ body size began to increase, their foraging became all the more efficient.

Clearly not all gigantic animals have been filter-feeders, though.

“Gigantism seems to have different causes and consequences in different lineages,” Slater said. “Whether you’re warm- or cold-blooded, what kind of food you eat, and where you live will all affect how quickly you can get big and how long you survive as a lineage. In the case of baleen whales, filter-feeding sets the table, but you need to serve the food to allow them to really take advantage.”

Blue whales today are endangered, though, and face threats from climate change, pollution and other human-related problems. The environmental stage then appears to be in place for baleen whales to evolve into smaller sizes again, but scientists are not sure if the marine mammal giants are capable of doing this, and within enough time for the reduced size to benefit their survival.

When prey patch densities reduce, baleen whales must forage to obtain enough energy, but their health may suffer as a result, Goldbogen said, referring to the whales expending more energy at times than their food intake provides.

He and his colleagues therefore wonder if the world’s oceans have the capacity to sustain both several billion people and the planet’s largest whales. If baleen whale populations continue to drop, then these icons of the oceans may very well join Megaladon and T. rex as being memorable giants of the past.

WATCH: Why Do Whales Breach?