Sheep Recognize the Faces of Obama and Other People in Photographs

Experiments suggest that sheep can recognize faces, a finding that may help us better understand neurodegenerative disorders in humans.

Sheep are not usually on the short list of the world’s most intelligent animals. They seem to be more associated with insomnia cures — envisioned furry passive creatures jumping over a fence — or children’s nursery rhymes like "Little Bo Peep."

In reality, studies over the past decade show that sheep brainpower can be comparable to that of many primates, with sheep sometimes matching human skills, depending on the given test.

The latest finding, published in the journal Royal Society Open Science, shows sheep can be trained to recognize human faces from two-dimensional portraits, and can identify a picture of their handler without prior training.

“I knew before that they had very good recognition skills,” senior author Jenny Morton from the University of Cambridge’s department of psychiatry told Seeker. “When I picked them up from the field, to work them over to the arena where they were about to be tested, they would come up running. If it was someone else, they would just stay where they were, or hide in the last corner of the field.”

She added that they even recognized her after a 6-month break.

How animals like sheep recognize us, however, has remained unclear. As for identifying each other, smells and sounds play key roles, but photos remove those cues. Sheep do not even see the world the same way that we do.

“They have very different vision from humans,” lead author Franziska Knolle, also from the University of Cambridge, explained to Seeker, adding that sheep can see about 270 degrees, but “have a blind spot in front of their nose.”

Knolle, Morton, and their colleague Rita Goncalves began by selecting four images to show to their animal charges. The goal was to find photos of two well-known women and two famous men. One of the first to be added was a portrait of former U.S. president Barack Obama.

“We ran the study last year, so it was during a time when Obama was constantly on the news, and the new elections were discussed,” Knolle said. “So, we were certain about using Obama, hoping our sheep would be smart enough to pick Obama. In general, we were looking for natural faces, and faces popular in the UK.”

For the other portraits, which were displayed on computer screens shown to the sheep, the researchers selected television journalist Fiona Bruce, who US TV viewers might know as the host of British Antiques Roadshow, actress Emma Watson, and actor Jake Gyllenhaal. 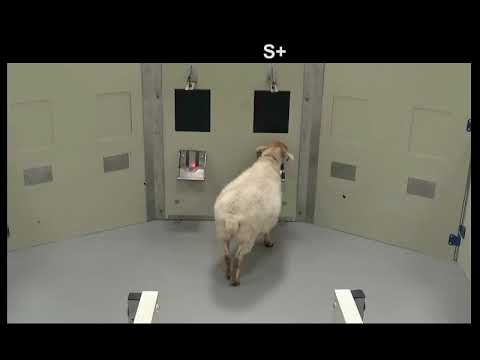 The eight sheep participants came from a flock that Morton saved seven years ago, when they were lambs headed to a slaughterhouse. Now, they live a comfortable life grazing outdoors at the UK university.

Training involved the sheep making decisions as they moved around a specially-designed pen. At one end of the pen, the sheep would see two photographs displayed on two computer screens and would receive a reward of food for choosing — by breaking an infrared beam near the screen — the photograph of the celebrity. If they chose the wrong photograph, a buzzer would sound and they would receive no reward. Over time, the sheep learned to associate a reward with the celebrity's photograph.

After training, the sheep were shown two photographs: the famous person’s face and another face. For this test, sheep correctly chose the VIP face eight out of ten times.

The researchers then showed the sheep the same faces, but in portraits taken at an angle. The sheep’s accuracy at selecting the right photos dropped by about 15 percent, which is a figure comparable to that seen when humans perform the task.

Finally, the researchers looked at whether the sheep participants were able to recognize a handler from a photograph without pre-training. The handlers typically spend two hours a day with the sheep and so the sheep are very familiar with them.

“We interpret our data as the sheep recognizing the 2D images as representing 3D people,” Morton said. 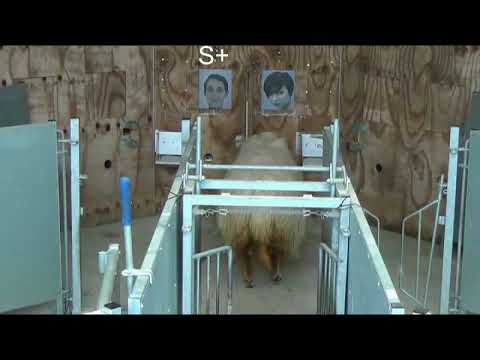 The findings are not a mere novelty demonstrating sheep skills. Morton and her team are studying the animals as part of research on neurodegenerative disorders, such as Huntington’s disease.

Huntington’s is an incurable disease that typically begins in adulthood. Initially, it affects motor coordination, mood, personality, and memory and can lead to other complex symptoms including impairments in recognizing facial emotion. Eventually, patients have difficulty in speech and swallowing, suffer loss of motor function and die at a relatively early age. There is no known cure for the disease; there are only ways to manage the symptoms.

Morton and her team say sheep are a good animal model for studying neurodegenerative diseases because of the relatively large size of their brains and their longevity.
The scientists are now working with a new flock of sheep that were imported from Australia.

The genetically modified sheep are 4 years of age now, and are at least 5 years away from developing observable symptoms. Already, however, the sheep are showing circadian behavioral and metabolic differences compared to normal sheep.

“We plan to use our cognitive tests to see if the Huntington’s disease sheep make decisions differently from the normal sheep,” Morton said. “If they do, then we have an excellent early marker for the disease in sheep that really matters to people. Cognitive decline in Huntington’s disease patients is one of their most distressing symptoms.”

Knolle added that future work could test whether or not sheep can differentiate between emotions. The determinations “could give us the option to develop interventions that improve and-or restore these processes.”

While it is hard to imagine what the future holds for these genetically modified sheep, for now, they are munching on the lush grass of the university’s grounds and snacking on “sheep nuts” cereal pellets. Should Obama or the other three VIPs included in the study come to visit them, it is likely that they would look up and do another double take.

WATCH: Can Alzheimer's Start in Your 20s?