Audio obtained from tags directly attached to the whales suggest that calves and mothers intentionally speak softly in case orcas pose a threat.

Newborn humpback whales, like human infants, are extremely vocal, yet new recordings reveal that baby whales often “whisper” to their mother in order to avoid being overheard by orcas, otherwise known as killer whales.

The sweet sounds, described in a study published in the journal Functional Ecology, were music to the ears of ecologists who were hoping to learn more about the first months of a humpback whale’s life.

“It is amazing to hear whales produce sounds underwater in an environment that is hard to access and is foreign to us,” lead author Simone Videsen of Aarhus University told Seeker. “It can only make you happy to hear these sounds produced by calves. The calls produced by the calves are very varied, and some of them sound like grunts while others are very squeaky.”

She added that the calves also produce rubbing sounds, “like two balloons being rubbed together,” which she and her colleagues suspect occurs when calves nudge their mother, signaling that they want to nurse. 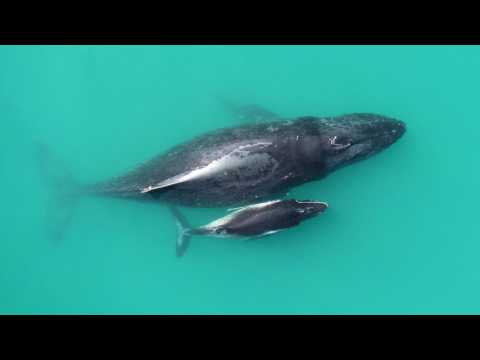 Videsen and her team weren’t sure what they would record when they affixed lightweight tags to the backs of eight humpback whale calves and two mothers. The sensitive, high-tech data tags, or “DTAGS,” were attached with suction cups and recorded sounds for up to 48 hours before they detached and floated to the surface.

Humpback whales are often on the move. They spend their summers in the food-rich waters of the Antarctic or Arctic before migrating 5,000 miles in the winter to the tropics in order to breed and mate. The moms and calves included in the study were located at Exmouth Gulf in the northwestern region of the state of Western Australia.

The researchers noted that humpback whales are slow to reproduce. Pregnancies last for a year, and calves — measuring 16.4 feet at birth, but growing by up to 3.3 feet per month — stay with their mothers until they are one year old. This includes the lengthy migration, which is a perilous one involving rough sea conditions and strong winds. As mothers and their calves approach the polar regions, the humpback whales must also contend with freezing temperatures.

RELATED: Most Humpback Whales Taken Off US Endangered List

Perhaps the whales’ greatest challenge, however, is to stay in communication with each other without being overheard.

“Potential eavesdroppers could be killer whales that are known to prey upon humpback whale calves in the area,” Videsen explained. “These [predators] could use the communication between mother and calf as a homing cue.”

“Other potential listeners could be male humpback whales that want to mate with the mother, which would disrupt potential nursing time for the calf,” she added.

As the newborns whisper, the mothers appear to emit very quiet calls from time to time in response. The mothers have the ability to vocalize much louder, so the finding suggests that they are intentionally controlling the sound of their calls.

The whale newborns might be incapable of making louder sounds, due to their smaller body size and inexperience in vocalizing, but many infants throughout the animal kingdom can make a noisy racket.

If the mothers and calves are intentionally lowering the strength of their vocalizations, that would suggest an extraordinary level of not only self-awareness, but also awareness of what others in the region could be capable of hearing. These skills could indicate a very high level of intelligence.

It has long been documented that loud man-made sounds, such as those produced by ships and military exercises, impact whales and other marine life. The determination that humpback whales whisper suggests that human-produced machinery sounds could be particularly harmful to calves and their mothers.

“Accordingly,” she noted, “we recommend that such effects are considered when mitigating human activities on nursing grounds.”