Ravens Ace Intelligence Tests, Exceeding the Skills of Some Primates

New research on animal cognition reveals that these smart birds can barter and plan for future events based on past experiences.

A female raven named “None” was recently disqualified from a study on bird smarts. The reason? She was too clever.

The experiment involved using a tool — a stone — to operate a “puzzle box” device that functioned like a vending machine. To receive a savory food reward, bird participants had to place the stone in a tubular slot at the top of the vending machine-type box. The action triggered the release of a meaty dog kibble that many ravens love.

The problem with None was that she figured out how to get the food without using the stone.

“Instead of using the stone and dropping it through the tube to push the platform down, she stuffed the tube with bark pieces and pushed on it with her beak or a stick, which collapsed the platform,” co-author Mathias Osvath of Lund University said. “We had to exclude her from the rest of the experiments as she did not need the functional tool anymore.”

The experiments of Osvath and co-author Can Kabadayi went on with ravens Rickard, Juno, Embla, and Siden that, like None, live in outdoor aviaries at Lund’s Corvid Cognition Station, Sweden. The results, published in the journal Science, show that ravens can plan for the future, forgo immediate rewards in order to gain better ones later on, and even have the ability to barter using tokens that function like money. 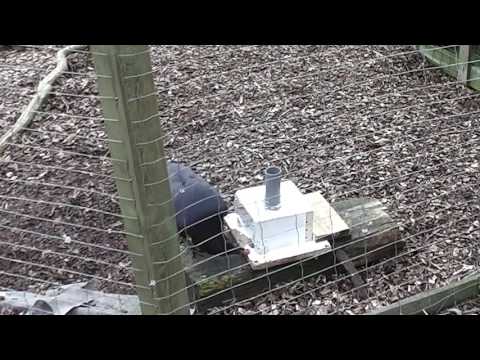 Because ravens typically do not use tools in the wild, and bartering is not one of their known natural behaviors, the findings provide evidence that these birds possess complex cognitive skills that can be flexibly applied to novel situations. Their brain power includes reasoning, drawing from both long and short-term memory and, at times, exhibiting restraint.

Great apes, such as chimps and gorillas, possess similar skills, but monkeys previously flunked tests that ravens could ace. Even human kids must be at least 4 years old in order to achieve certain cognition and behavior feats, with control of impulsiveness being particularly challenging, as many parents with youngsters in the “terrible twos” might observe.

Kids, as well as ravens, require time to learn that restraint can often be beneficial. Considering that the average lifespan of a raven in the wild is just 10–15 years, their cognitive achievements are all the more remarkable.

Regarding raven memory, prior research found that a “raven can remember a single encounter with a human for at least a month,” so “they can remember information for a very long time,” Osvath said.

For the new series of experiments, Osvath and Kabadayi first trained the ravens to use a tool, which again was a stone, to open the puzzle box in order to access a food reward. The ravens were then presented with the box, but not the tool. The box was subsequently removed.

RELATED: The Number of Bird Species Could Be Double What We Thought

One hour later, the ravens were presented with the tool, as well as several toy “distractors” that were too large to fit into the slot of the vending machine-like puzzle box. The distractors included a wooden wheel, a wooden ball, a T-shaped metal pipe and a plastic toy car. Nearly every raven chose the correct, apparatus-opening tool, with a success rate of 86%.

A high success rate (78 percent) was also seen in similar experiments where ravens used a token — a blue plastic bottle cap — to later barter for a food reward. The ravens planned for bartering more accurately than apes have done in earlier studies, the researchers reported. The birds even began to store their tokens, like saving money, for future trades.

Finally, the ravens were presented with the correct, apparatus-opening tool, distractor tools, and an immediate food reward, but were only permitted to select one item. The ravens demonstrated self-control on par with great apes by opting for the tool, which eventually earned them a better food reward than the immediate treat.

The study only looked at ravens, but it is possible that other corvids, such as crows and scrub jays, possess similar — if not equally impressive — smarts.

“When it comes to brains, recent research suggests that bird brains can pack a much larger number of neurons than mammalian brains,” Osvath said. “In particular, song birds and parrots have very high numbers of neurons per unit of volume.”

“Corvids are among the largest song birds — the raven is the largest — hence they have the largest brains and more neurons than others,” he continued. “This might be a clue to why corvids are cognitively more complex than other birds, given that neurons are the basic information processing units.”

Markus Boeckle and Nicola Clayton of the University of Cambridge Department of Psychology wrote an “Insights” commentary, also published in Science, concerning the new discoveries about ravens.

Boeckle said that the determinations advance “our understanding of complex cognition, as we did not have evidence in any (non-human) animal that future planning is flexibly used across behaviors.”

“By providing evidence for flexible use of future planning in animals, we can assume that, in some species, the cognitive abilities are based on general intelligence,” Boeckle added. “Furthermore, we can start to understand the selective pressures, which led to the evolution of flexible problem solving abilities.”

RELATED: Birds That Crash Into Cars Tend to Have Teeny Brains

In future, the scientists hope that studies on clever creatures like ravens might reveal how intelligence evolves in any animal species, including humans.

There is now a heated debate among theoretical biologists concerning whether or not evolution is predictable. Some studies suggest that it is, while others indicate that randomness may be at play more often than previously thought. Perhaps a mixture of both occurs with each having equal importance.

“The questions are many and complex, and to answer them we need not only people like us, but also neurobiologists, geneticists, and others,” Osvath said. “To us this is one of the most interesting questions in science: What is this thing we call intelligence, and are there any underlying principles?”