Experiments with mice showed that pairs of rodents established and adhered to rules that led to mutual reward.

Nearly every religion advocates a version of the Golden Rule, or the belief that you should treat others as you would have them treat you.

Korean researchers have discovered that two mice will create and adhere to rules that help both receive more rewards than if they worked against each other.

Publishing their findings in the journal Nature Communications, the researchers hope their work will shed light on how humans follow rules.

“When people are cooperating with each other, both win,” Hee-Sup Shin, a neuroscientist at the Institute for Basic Science in South Korea, told Seeker.com. “A very simple example is a traffic light. Traffic flow is much smoother when people observe the rules. We want to know how the brain controls this kind of behavior.”

In their experiment, which tracked 19 pairs of mice over 20 days, the researchers inserted a wireless electrical receiver into a pleasure center of the rodent’s brain, the medial forebrain bundle. An infrared light could turn on the receiver and stimulate the rodents’ brains from afar. 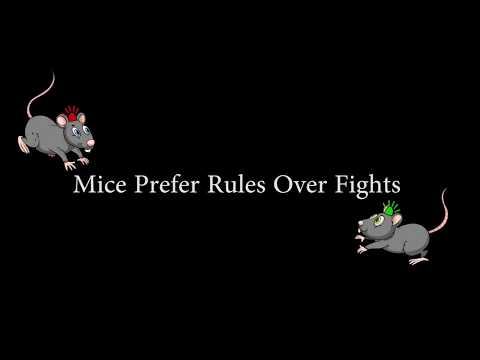 Studies have shown that mice prefer the electrical stimulation to mating, the researchers said in a press release. The same part of the human brain elicits happiness when we eat or socialize with friends.

Researchers then put individual mice in an approximately 2.5-square-foot box that contained a central common area as well as two separate zones that were walled off from each other.

When a mouse was in the common area, a blue light would shine in one of the two divided zones. When the mouse walked to that zone, it triggered the infrared signal and received a 5-second jolt of pleasure.

RELATED: Mini Human Brains Have Been Implanted Into the Brains of Rodents

Once the mice were trained to understand the relationship between the light and the jolt, the researchers put two mice in the box. That’s when the real fun started.

The researchers altered the game, requiring both mice to remain in the common area for a blue light to appear. The light, moreover, would only shine in one of the two separate zones. Lastly — here is where the Golden Rule comes into play — if more than one mouse entered a zone where the blue light was shining, it would turn off and cut the joy jolt.

“In the beginning, the first day and second day, it’s a disaster,” said Shin. “One mouse is faster. He gets there and the other follows and the reward is soon disrupted. But as the training continues, eventually they figure out the reward zone allocation.”

In time, 60 percent of the mice began meeting in the common area to begin the process. Most importantly, they divvied up the separated areas so that one would take the right zone and the other took the left. Eventually, the animals learned to take turns, receiving their stimulation and going back to the common area and staying put while their counterpart ran off to enjoy themselves.

The scientists switched up the pairs, but the mice quickly adjusted to the change and went back to their system. Sometimes mice violated the rules, but often its partner stuck with it anyways and the other fell in line. If both mice repeatedly flouted the rules, the system was more likely to break down completely and both would lose out. But even in those cases the mice were often likely to work together in their final sessions.

In future studies, Shin and his team hope to see what happens when three or more mice were in the box and whether the creatures would cooperate if the blue light turned on in one of the separate zones 90 percent of the time.

But meanwhile, he said, the experiment shows that mice aren’t fools. “Tolerance is the key for the maintenance of reward,” said Shin. “Some mouse might violate a rule and, if you violate the rule in the same way, there is no rule. They are smart.”