Jellyfish Sleep, and Now Scientists Wonder If Plants and Bacteria Sleep Too

The discovery that jellyfish go to sleep is making scientists rethink when sleep first evolved, what it actually is, and how it helps us and other snoozers.

Despite the fact that jellyfish lack a centralized nervous system, new research provides strong evidence that these soft-bodied marine organisms sleep. The findings, published in the journal Current Biology, have scientists reevaluating what sleep is and what it does.

“Some people probably think that a brain is needed for a sleep behavior to exist, especially those scientists that focus on the sleep states of mammals,” Michael Abrams of Caltech, who co-led the study with his Caltech colleague Ravi Nath, told Seeker.

“Though there are anecdotal observations that suggest some species don’t sleep, I do not know of any animal that has been fully interrogated that has been proven not to sleep,” he added.

Nath and fellow researchers from three Caltech laboratories — headed up respectively by Paul Sternberg, Viviana Gradinaru, and Lea Goentoro — decided in this case to investigate Cassiopea, aka the Upside-Down Jellyfish. This primitive genus essentially spends its entire life sitting upside down on the ocean floor, pulsating every few seconds.

Three criteria must be met in order for an organism to be considered as “sleeping.” First, it must demonstrate a period of reduced activity. To test this in the jellyfish, the researchers used cameras to continuously monitor the marine dwellers in tanks. The footage revealed that jellyfish go through periods of inactivity at night, only pulsing about 39 times per minute, compared to about 58 times per minute during the day.

“If jellyfish dream, what would they dream about?”

The second criteria for sleep is decreased response to otherwise-arousing stimuli. To test this in the jellyfish, the scientists put a jellyfish on a platform higher up in the tank, and pulled the platform out from underneath the animal once it showed signs of quiescence.

Normally, an alert jellyfish would immediately swim to the bottom of the tank, but the jellyfish in the sleep state floated in the water for up to five seconds before “waking up” and re-orienting itself. This would be like a person sleeping, having a cover pulled off, and then gradually waking up and reacting to the change.

The third and final criteria for sleep is that the organism must show an increased sleep drive when it is deprived of this presumably more restful state. 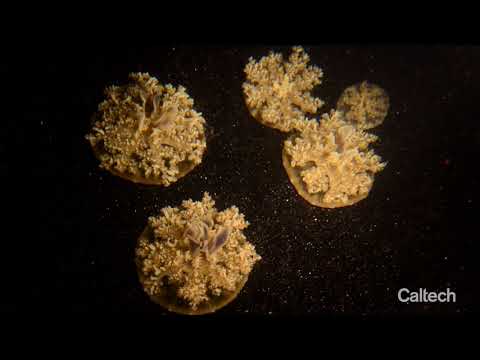 Caltech footage of the jellyfish Cassiopea.

To test this in the Cassiopea individuals, the researchers pulsed water at them every 10 seconds for 20 minutes, effectively “poking” them to keep them awake. The scientists later observed that the squirted jellyfish were more likely to fall into the sleep-like state during the day, when they would normally be active.

All of the new evidence then supports that jellyfish do indeed sleep, or at least exhibit a sleep-like state. Melatonin, a compound known to promote sleep in humans and other animals, did the same to the jellyfish, the scientists discovered.

Clearly sleep is beneficial to animals, including jellyfish. Nath suggested “that sleep is serving as a period of consolidated energy conservation.” Abrams added, “We see that the jellyfish need sleep for them to behave normally, and this indicates an important role for metabolism.”

As for what happens internally to the jellyfish when they sleep, no one is sure at present. It has not been ruled out that jellyfish dream, for example.

“If jellyfish dream, what would they dream about?” Abrams mused. “For us to approach this question, we would need to directly record the neural activity during the day and night. Though it may be impossible to definitively say that they dream, it would be interesting to see if they have sleep phases, perhaps similar to the neural activity oscillations seen during REM.”

Based on this and prior studies, it is possible that Earth’s first multicellular organisms exhibited sleep — or something like it — as well as other behavioral states.

Nath mentioned that jellyfish are among the first animals to develop neurons, so it could be that sleep first evolved with the emergence of these specialized cells that transmit nerve impulses.

RELATED: How Can Birds Sleep While They Are Flying?

Alternatively, sleep may be tied to other biological factors, opening up the possibility that plants and bacteria go through sleep-like states too.

Earlier research has even found that plant leaves can move in response to a biological clock. Some researchers refer to these and other circadian plant phenomena, like the closing of flowers, as “sleep movements.”

“Just like plants and other multicellular organisms, bacteria have different states,” Nath noted, “although I do not know if they sleep, as there is no detailed study showing that bacteria exhibit a sleep state.”

Many questions surprisingly remain about a sleep, although it is such a common, widespread condition.

“I think the big next question we would like to answer — either by us or other research groups — is why is it that sleep evolved? And why do we sleep?” Bedbrook said. “Understanding these could be very important in understanding sleep disorders.”