Humans May Be Forcing ‘Right-Handed’ Whales to Act Like Lefties

Most blue whales are "right-handed," but new research finds they may be acting like lefties under challenging conditions caused by humans.

A good day in the life of a blue whale — the world's largest animal — likely involves feasting on deep ocean krill. The whales, which can weigh as much as 25 elephants and extend over the length of a basketball court, may eat up to 8,000 pounds of these tiny shrimp-like crustaceans with relative ease when filter feeding in the ocean depths.

Eating closer to the surface, where there are fewer krill, is not as easy for the ocean giants, which must expend more energy per morsel.

"We have found that blue whales maximize their energetic gains when feeding on deep and dense prey but only ‘break even’ when feeding on smaller less dense patches at the surface," Ari Friedlaender of the Institute of Marine Studies at the University of California, Santa Cruz told Seeker.

While observing blue whales over the years, Friedlaender and his team noticed that the marine mammals exhibit lateralized behaviors, which we think of as "handedness" in humans. As with our species, most blue whales tend to have a right-side bias. They tend to roll to the right when performing acrobatic maneuvers to capture prey.

Friedlaender and his colleagues, however, recently noticed that the whales shift direction and roll to the left when performing 360-degree barrel rolls in shallow water. This discovery, reported in the journal Current Biology, marks a scientific first.

"To the best of our knowledge, this is the first example where animals show different lateralized behaviors depending on the context of the task that is being performed," said study co-author James Herbert-Read from Stockholm University. 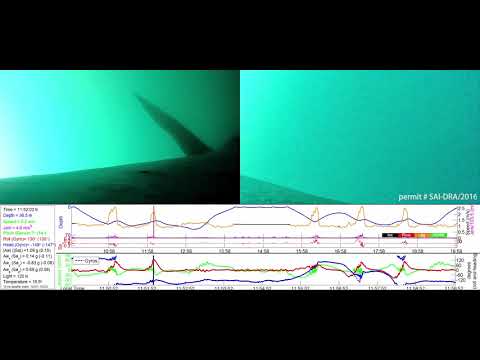 This video shows a fin whale off Terceira Island in the Azores lunge feeding on its right side. The stereotypy of this behavior can be seen in the roll data in the bottom graph. The cameras are 90 degrees offset from each other.

In total, the researchers collected data on more than 2,800 blue whale rolling lunges. They found that the marine mammals approach their prey using two different rolling behaviors: In some cases, the whales roll to the side and then back, turning 180 degrees or less; in other cases, they perform a complete barrel roll. 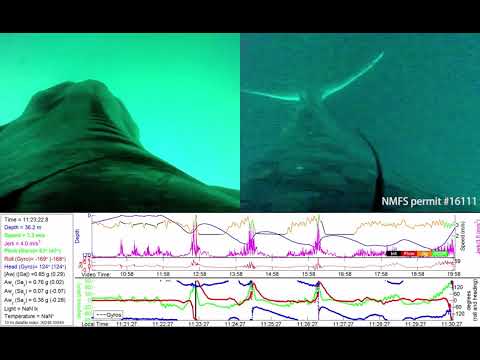 This video shows a blue whale in Monterey bay doing a vertical approach on a patch of krill concurrent with a 360 degree roll to the left. You can see the patch and sky rotate as the animal rotates. The camera views are forward and backward facing.

It was when the animals did a barrel roll in shallow water to attack a small patch of prey from below at a steep angle that they more often spun left, going against their general preference.

The researchers are not sure why this happens, but they suspect that the whales are positioning themselves to favor their dominant right eye. This would allow the marine mammals to maintain a visual connection with their prey.

"In vertebrates as a whole, the right eye contra-laterally connected to the left hemisphere of the brain is what helps to control fine motor functions and repeated behaviors to increase task efficiency," Friedlaender explained. 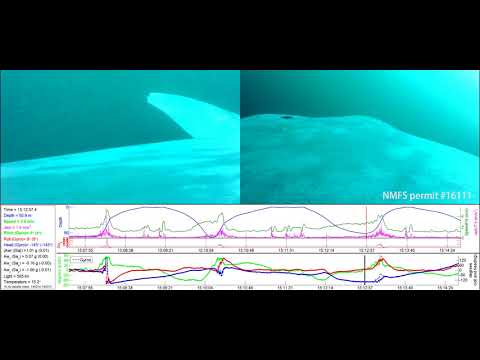 This video shows a blue whale off Southern California performs a high-pitch lunge with no roll until after the lunge when it rolls back to the dorsal-up position.

The tendency for a right bias could go back to the common ancestor of all mammals, and even before then. Friedlaender said that the bias is ubiquitous even in "vertebrate groups that are far more primitive or older than mammals."

It can be challenging to accomplish tasks that go against one's inherent lateralization. Consider the awkwardness of a right-handed person forced to wield a pen in their left hand, or vice-versa for a leftie.

Given the challenges of studying the largest animal that has ever lived on Earth, scientists are unclear if blue whales are more flexible than other animals in switching from right to left preference. Perhaps, even with their right bias, they are more ambidextrous than previously thought.

RELATED: Scanning for Blue Whales in the Ocean Just Got a Lot Easier

Whales, however, are facing unprecedented challenges due to human activities. Prior research, for example, showed that blue whales subjected to military sonar may react by swimming hundreds of miles, changing swimming depths so rapidly that bleeding occurs in their ears and eyes, and may even beach themselves.

The new study was actually borne out of work sponsored by the Office of Naval Research to understand the behavioral responses of blue whales to navy sonar.

"By understanding the context surrounding when whales behave in certain ways we can better understand the impact of disturbance to these animals both when it occurs, but in a chronic sense too, over time," Friedlaender said.

"If the whales were forced, over time, to feed in less quality prey patches and have to expend more energy doing so, this would likely impact individual animal fitness and eventually lead to decreases in growth rates and reproductive rates," he added.

RELATED: Animals Can No Longer Escape Human Noise Pollution in the US

The researchers next hope to investigate whether or not there are asymmetries in the bodies of blue whales that would make it more challenging for them to roll to the left based on their anatomy. Video cameras attached to the whales could not only show this, but also discern if the krill have a lateralization bias.

They also hope to learn if blue whales in other populations at different locations also perform both right and left lunge rolls. If so, and if no sonar is present, then the flexibility may just reflect a common, normal behavior. If not, then the left-shifted rolls seen in shallow water off the coast of California may provide evidence that the whales are struggling to get enough food.

"We are just stretching the surface of what we know about how whales make a living in the ocean," Friedlaender said. "But by combining new technology with our questions, we can begin to better understand how these animals behave, what they need to survive, and how human impacts in the ocean — such as sound — affect these animals."