The fossilized Borealopelta markmitchelli (nodosaur for short) is so well preserved, evidence of the animal’s last meal remains in its gut.

Henderson and his colleagues at first were baffled by the fossils, which looked nothing like the marine reptile remains that had been unearthed in the Alberta area. The chunk of rock encasing the fossils was transported to the museum, where technician Mark Mitchell spent more than 7,000 hours slowly and gently removing material away from the specimen. When paleontologist Caleb Marshall Brown of the museum first saw the preserved beast in full, his jaw dropped.

There, in vivid 3D, was a nodosaur, which is a type of hefty armored dinosaur.

“This unique combination means that, with the exception of the color, the animal looks the same today as it did when it was alive,” he added. “It is almost as if the animal went to sleep and turned to stone — a fossil masterpiece.” 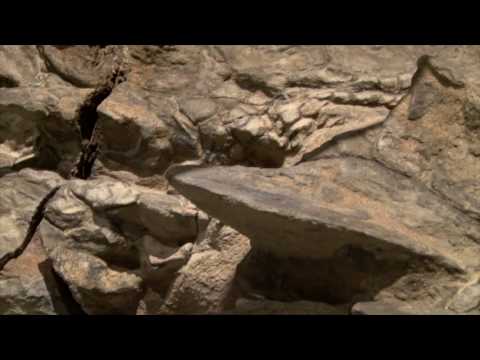 In honor of Mitchell, the dinosaur was named Borealopelta markmitchelli. The new species, now considered to be the world’s best-preserved armored dinosaur, is described in the journal Current Biology. Dated to 110 million years ago, this “dinosaur equivalent of a tank,” according to the authors, weighed in at more than 2,800 pounds and grew to at least 18 feet long.

The mine site during the Early Cretaceous was a sea, which is one reason why Henderson and his team first thought the fossils belonged to a marine reptile. The researchers, whose work was supported by the National Geographic Society, can piece together the extraordinary circumstances that led to the dinosaur’s preservation.

Henderson explained that, after the dino died, its armor still would have been anchored into the skin in a dense, collagenous mesh.

“This armor would have deterred scavengers from trying to pull off chunks while it floated on the water surface,” he said. “The thick hide also was able to contain the high gas pressure that would have built up inside the decaying carcass. A fully inflated, super buoyant carcass was able to float far offshore away from damaging waves crashing on a beach.”

The dinosaur’s body wall did eventually rupture. The carcass then drifted down to the seabed in water that was at least 164 feet deep. Few fossils from burrowing species exist at that spot, suggesting low-oxygen conditions with little biological activity. There, the carcass remained undisturbed until Funk’s fateful day.

The animal’s thick hide, which aided preservation of the remains, still retains organic material, such as pigments. These biomolecules show that B. markmitchelli had reddish-brown skin that was darker at the top and lighter on the animal’s underside. This light-dark combination is common in animals alive today and is known as countershading.

RELATED: This Enormous Crocodile With T. Rex Teeth Was a Top Jurassic Predator

Co-author Jakob Vinther of the University of Bristol explained that countershading helps animals to blend into their landscapes, camouflaging their 3D forms. The dinosaur lived in a dry and open environment where the ground and vegetation exhibited earthen tones of brown, yellow, and red. Its reddish-brown hues strengthened the camouflage effect.

It was thought that few predators dared to take on husky armored dinosaurs, but B. markmitchelli evolved more for defense than offense. Brown and Henderson suspect that Acrocanthosaurus, a gigantic meat-loving dinosaur that measured around 38 feet long and weighed about 6.8 tons, hunted the armored dinosaur.

“The best anti-predatory defense that Borealopelta had would have been avoiding detection in the first place, and then looking like an unappetizing meal — by being covered in bony armor,” Brown said.

Henderson agreed, adding that the nodosaur probably hunkered down as a last resort, hoping that its armor would hold if the predator tried to take a bite.

The dinosaur is so well preserved that organic remains of its last meal appear to be present in its fossilized gut. Vinther said he and his colleagues “have some idea” concerning what this meal consisted of, but they wish to conduct a chemical analysis and other investigations before coming to a conclusion.

Don’t hold your breath for retrieval of DNA from the specimen, though.

“DNA does not survive more than a million years, if it had been frozen down,” Vinther said. “We may find residues of proteins if we are lucky, but they would not be particularly well preserved.”

In the meantime, the specimen is currently on public display at the Royal Tyrrell Museum of Paleontology in Drumheller, Alberta. Visitors have said that it reminds them of a lifelike sculpture and a “Game of Thrones” dragon.

WATCH: What Color Were Dinosaurs?