Chimps Tailor Their Communications Based on What Other Chimps Know

While watching chimpanzees help each other, researchers discovered the primates possess an important communication skill previously attributed only to humans.

Primatologist Catherine Crockford will never forget the day when a chimp, in his own primate way, asked her to move.

She was sitting on the forest floor, watching primates with her back against a tree, when a male chimp named Zig approached her. He looked calmly, but directly, into her eyes and held her gaze.

"This is very unusual for any chimp, but especially for this chimp," Crockford, a research group leader at the Max Planck Institute for Evolutionary Anthropology, told Seeker. "I lowered my gaze, as we are supposed to do. Zig remained in position."

Some seconds later, she looked up again. Zig was still there, calm and relaxed, but unwavering in his attention-grabbing stare down. Crockford looked down and pretended to work. When she was 6 or so feet away, Zig approached the tree that she had been leaning against and climbed it.

"It seemed that he required me to move, so he could access the tree," Crockford said, explaining that Zig then foraged for food in the tree.

The moment, which could have different interpretations, stayed with her. Crockford, who along with with Roman Wittig directs the Taï Chimpanzee Project, decided to investigate chimp communication abilities.

In a study published in the journal Science Advances, she, Wittig, and senior author Klaus Zuberbühler report that chimpanzees possess a degree of perception and communication previously thought to be unique to humans. 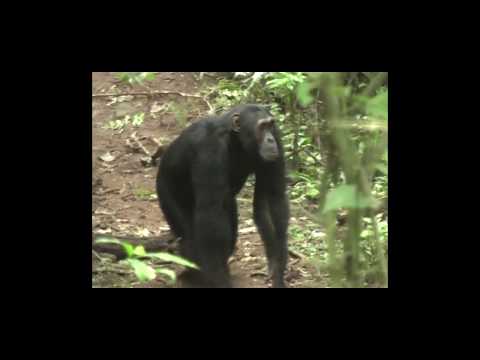 The researchers came to the conclusion after designing a series of experiments that involved observing wild chimps in the Budongo Forest of Uganda. The scientists hid a realistic fake snake  — a model of a venomous gaboon viper — in the forest and watched how the chimps reacted.

"My observations from wild chimpanzees show that while unexpectedly encountering a snake or snake model may trigger a startle response, they often then investigate the snake, but do not necessarily show signs of fear," Crockford said. "This is different in the case of pythons, which are the only snakes likely to prey on chimpanzees."

In the first experiment, the researchers recorded how wild chimps used their bodies to indicate the location of the snake to other chimps. This behavior is known as marking. Crockford said  marking involves repositioning oneself to have direct visual access to an object or individual — in this case, the seemingly real snake — and the receiver. Eye movement can then "tell" the receiver where something, or someone, is.

In one third of the cases, the chimps marked the location of what they thought was a real viper, alternating their gaze between other chimps and the snake.

In the second experiment, the scientists evaluated two different scenarios involving pre-recorded calls from other chimps. In one scenario, a hidden speaker played a call that suggested a nearby chimp knew about the snake. In the second, the speaker played a chimpanzee call indicating ignorance.

When the actual chimps came across the snake, those that had heard the call suggesting ignorance from a troop member gave more warnings, through both vocal “alert hoos” and body language.

"Alert hoos are produced to a specific set of threats, such as snakes, snares, and leopard scat," Crockford said. "They can perhaps be classified as 'hidden threats.' Other threats elicit other calls, such as bush pigs, leopards and, out-group chimpanzees."

RELATED: Sheep Recognize the Faces of Obama and Other People in Photographs

Not only do the complex calls of chimps contain specific information about what they are observing, but their visual cues can add additional information. The primates take into account what the recipient knows, and adjust their effort accordingly.

The researchers eliminated the possibility that the marking behavior had some other significance, such as the "marker" chimp trying to self-protect by keeping an eye on both the threat and the troop mate. 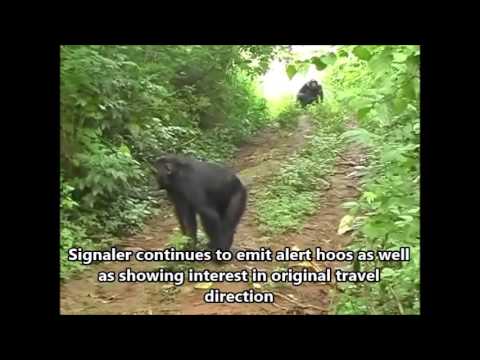 “A reason the chimps may not have to monitor these snakes so closely may also be the reason that they take such effort to inform others about them: Gaboon vipers are highly sedentary,” Crockford added. “Once they have eaten, they will barely move for several weeks. Thus, once seen they really pose very little threat. The danger is in stepping on them — a very real possibility given how camouflaged they are, but once they're location is known, the chimps are safe."

The study adds to the growing list of evidence showing that chimps go to a lot of trouble to look out for each other.

"Chimps can show concern for others in a number of ways, particularly in offering support for others who are being attacked," Crockford said. "Entering a fight on behalf of kin or a friend can change the outcome of the fight into the friend's favor."

Since chimps often adopt family members and only a few chimp community members are related to each other, most of the relationships in the troops can best be described as friendships. While helping out a friend often comes with immediate costs, in the long run, it can pay off. Crockford believes that friendships among primates have been "deeply important" for a very long time.

Communication, whether with friends or relatives, benefits from having an awareness of what the other person knows. Human conversations rely on this with exchanges ideally taking into account the other person's feelings and beliefs.

"Studying our closest living relatives, whether chimpanzees or other primates, gives a window into understanding ourselves,” she added. “If we see similarities to ourselves across primates, it suggests that these traits have been important for survival for millions of years."