Dung Beetles Dance and Take a Snapshot Map of the Sky

One picture of the heavens, while dancing a jig, is enough to orient the poo-pushing insect and guide it across the savanna.

Researchers have known for a few years now that the dung beetle uses the Milky Way galaxy as a map to get itself across the landscape, as it pushes a precious ball of dinner poo toward a safe place to eat.

Now, scientists from Sweden's Lund University have established that all the beetle needs is one good snapshot taken of the heavens in order to find its way. It doesn't "rely on an innate prediction of the natural geographical relationship between celestial cues," as the researchers wrote.

And the kicker? The beetles take this single heavenly picture while simultaneously dancing atop their poo ball.

Dung beetles, true to their name, have a curious diet: They eat poop. They'll search out a dung heap, roll some of it up in a beetle-sized ball, and push the ball away in a straight line, to protect the meal.

A 2013 study, from the same Lund University team, first determined that they used this bit of celestial navigation to make their way. (Check out our video explainer of that discovery, to, well, orient yourself a bit more to that finding.)

In the new study, the scientists placed the beetles in a research facility, where they could control an artificial sky. This let them tweak a fake firmament to test how the beetles reacted when objects like the "sun" or "moon" changed direction.

The tests revealed the insect's one-snapshot approach. The little dung-pusher dances around, stores the image in its brain, and then heads off, using the stored picture to sync up with what it sees in the present sky.

"We are the first to have shown that dung beetles are taking these snapshots," said lead researcher Basil el Jundi in a statement. "We are also the first to show how they store and use the images inside their tiny brains."

One thing should be noted about the beetle's "dance." The term, often applied to its moves, conjures up cartoon images of the insect doing a little jig, but, unfortunately (because a dung beetle jig would be pretty funny) it's a bit of poetic license. Here's what the "dance" really looks like: 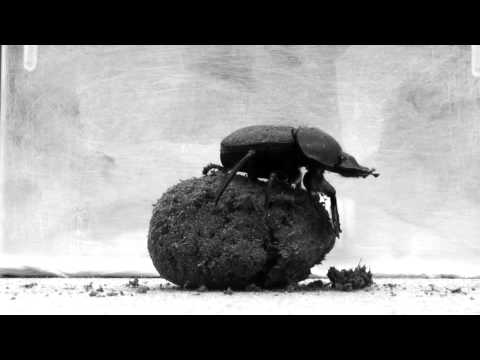 "Other animals and insects also use the position of celestial bodies to navigate," el Jundi said, "but the dung beetles are unique. They are the only ones to take a snapshot where they gather information about how various celestial bodies, such as the sun, moon and stars, are positioned."

el Jundi and his study colleagues have published their findings in the journal Current Biology.

A beetle basks on its dung ball.

Insects and other creepy crawlies may be tiny, but their lineages are mighty, finds a new study that determined the common ancestor of mites and insects existed about 570 million years ago. The study, published in the latest issue of the journal Science, presents an evolutionary timeline that settles many longstanding uncertainties about insects and related species. It found that true insects first emerged about 479 million years ago, long before dinosaurs first walked the Earth. Co-author Karl Kjer, a Rutgers entomologist, explained that mites are arthropods, a group that's distantly related to insects. Spiders and crustaceans are also arthropods.

Spiders such as the huntsman spider can, like mites, trace their lineages back to about 570 million years ago, according to the new study. The researchers believe that the common ancestor of mites, spiders and insects was a water-dweller.

Photos: Giant Spiders to Freak You Out

Millipedes, such as the one shown here, as well as centipedes are known as myriapods. The most recent common ancestor of myriapods and crustaceans lived about 550 million years ago. Again, this "mother of many bugs" would have been a marine dweller. Kjer explained, "You can't really expect anything to live on land without plants, and plants and insects colonized land at about the same time, around 480 million years ago. So any date before that is a sea creature." Moving forward in time, the most common ancestor of millipedes and centipedes existed a little over 400 million years ago. The leggy body plan has proven to be extremely successful.

"This is an early insect that evolved before insects had wings," Kjer said. Its ancestry goes back about 420 million years. The common ancestor of silverfish living today first emerged about 250 million years ago. Dinosaurs and the earliest mammals likely would have then seen silverfish very similar to the ones that are alive now.

Dragonflies and damselflies have family histories that go back about 406 million years. Kjer said that such insects looked differently then, however. "For example," he said, "they had visible antennae." Their distant ancestors were among the first animals on earth to fly.

"Parasitic lice are interesting, because they probably needed either feathers or fur," Kjer said. As a result, they are the relative newbies to this list. Nonetheless, the researchers believe it is possible that ancestors of today's lice were around 120 million years ago, possibly living off of dinosaurs and other creatures then.

Crickets, katydids and grasshoppers had a common ancestor that lived just over 200 million years ago, and a stem lineage that goes back even further to 248 million years ago. A trivia question might be: Which came first, these insects or grass? The insects predate the grass that they now often thrive in.

Nightmarish Cricket That Eats Anything Is Now Invading the US

Dinosaur Era fossils sometimes include what researchers call "roachoids," or wing impressions that were made by ancestors to today's roaches, mantids (like the praying mantis) and termites. "Some cockroaches are actually more closely related to termites than they are to other cockroaches," Kjer said, explaining that this makes tracing back their lineages somewhat confusing. He and his colleagues determined that the stem lineage goes back about 230 million years, while the earliest actual cockroach first emerged around 170 million years ago.

Termites and cockroaches have a tightly interwoven family history. Termites similar to the ones we know today were around 138 million years ago. Now we often think of termites as pests, but they are good eats for many different animals, which back in the day would have included our primate ancestors.

Flies like houseflies that often buzz around homes belong to the order Diptera, which has a family tree that goes back 243 million years ago. The most recent common ancestor for modern flies lived about 158 million years ago, according to the study. There is little doubt that the earliest humans, and their primate predecessors, had to contend with pesky flies and all of the other insects mentioned on this list. All of these organisms are extremely hardy. The researchers determined that, in the history of our planet, there has only been one mass extinction event that had much impact on insects. It occurred 252 million years ago (the Permian mass extinction), and even it set the stage for the emergence of flies, cockroaches, termites and numerous other creepy crawlies.