Drones Near Superbowl Will Get Shot Down, FAA

The no drone zone goes into effect on Sunday and extends 36 miles away from Levi's Stadium in Santa Clara, Calif.

Remember back in December when the FAA said you had to register your drone? The better to fine you with.

The aviation administration recently issued notification that it will fine anyone flying their craft in the "no drone zone" during Superbowl 50 this Sunday.

How to Register Your Drone

And it warned operators that if needed, it will use "deadly force" on aerial vehicles entering the restricted air space.

The zone extends 36 miles away from Levi's Stadium in Santa Clara, Calif., where the Carolina Panthers will face the Denver Broncos. Violators will pay a fine and could also face prosecution.

If you're not exactly sure what geographical areas we're talking about, it's basically all of San Francisco to the north and west, Santa Cruz, Morgan Hill and Gilroy to the south, and San Jose and Pleasanton to the north and east.

Still not sure, but really hankering to fly your drone on Sunday? You might want to download the FAA's new app, B4UFLY for iOS and Android. I contains all of the answers to your drone-flying questions.

The "no fly zone" goes into effect starting at 2:00 PM until 11:59 PM local time. The game starts at 3:00 PST. The video below also gives some information.

Of course, you know some doofus will break the law, so to keep abreast of the arrests, be sure to follow #NoDroneZone on Twitter. 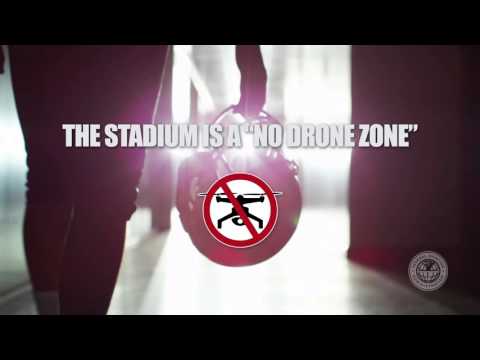