The fissure is deep enough to swallow any car unlucky enough to be on one of the dirt roads that cross it.

Back in 2014, Joseph Cook, a research geologist for the Arizona Geological Survey, was peering at Google Earth images of Arizona on his computer when a giant crack sprawling across the desert caught his eye.

"There's a mandate in Arizona in which people have to disclose whether there's a fissure on their property before they sell it, so we [the Arizona Geological Survey] routinely monitor and map fissures in the area," Cook told Seeker. But the size of this giant earth fissure warranted an in-person visit, especially after heavy rains in 2014 and again in 2016 caused the crack to grow.

When Cook went out to the spot in Tator Hills in Pinal County, which is about 12 miles south of Arizona City and 18 miles west of Red Rock, he walked along the enormous crack, measuring it to be nearly two miles long. "It was really deep, up to 30 feet deep in some spots, and had very sharp edges," he said. In some areas, the crack was 10 feet wide.

He called on colleague Brian Gootee to fly his drone over the sprawling fissure. It was the first time Cook had thought to use a drone to showcase a crack in the Earth. You can take a peek of the stunning aerial imagery, which they published last week, in the video below. 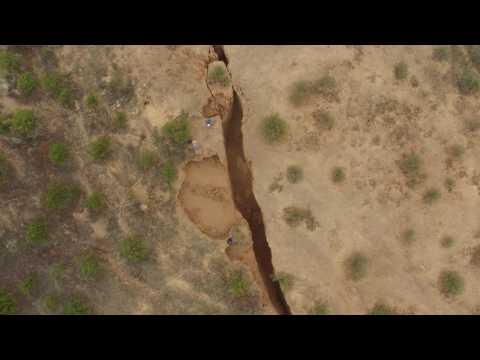 Arizona's earth fissures - first noted near Eloy in 1929 - have become a growing concern, especially after torrential monsoon rains reactivated a crack near Queen Creek, also in Pinal County, in August 2005. By 2006, legislation was signed into law requiring comprehensive mapping of earth fissures throughout Arizona and publication of the maps online for anyone to easily reference.

Fortunately, the crack Cook discovered is "in the middle of nowhere," he said, but fissures near homes can be a real threat. Homeowners in close proximity to one can experience flooding when the fissure captures water, which can undermine their home foundation and even cause cracks in their house. "In an extreme example in Arizona, there was a fissure near a home with a horse on property," Cook said. "The horse fell in the fissure, got stuck and had to be put down."

While the enormous crack in the Arizona desert isn't close to any homes or buildings, Cook did notice tire tracks from an ATV that must have recently maneuvered around it. "The fissure covers a couple dirt roads so I guess you could crash into the fissure, but it's a good thing that it's not near a bunch of homes," he said. "Well, not yet, anyway." (Cook added that it's not uncommon for new developments in Arizona to be built in outlying areas, but there are no plans that he's aware of for this particular region.)

Earth fissures usually occur in response to land subsidence, which is the gradual settling or sudden sinking of the Earth's surface, oftentimes caused by declining groundwater levels. Cook's theory is that Arizona's fissure problem is a symptom of the area's overuse of ground water, mostly for agriculture. He added that in some parts of Arizona, the ground surface is roughly 18 feet lower today than it was in the 1950s.

Although Cook's decision to fly a drone over the crack for some one-of-a-kind footage was purely due to his own intrigue, he believes drone technology could help to better monitor the fissure's growth and changes in the years to come.

Since 2006, the Arizona Geological Survey set up 26 study sites in the area and mapped nearly 170 miles of similar fissures along Arizona. However, this particular crack certainly won't be brushed over or dismissed.

"I'll probably go back there any time it rains a lot, at least a couple times a year, and keep tabs on it," he said. "Not only to keep my map updated, but out of interest to see how much it will grow."

If Cook had to bet on it, he's almost positive he'll see expansion in the years to come. "I do believe it's going to get wider," he said. And longer? Only time will tell.