The southern right whale calf was spotted off the coast of western Australia.

Scientists studying whales in Australia have gained rare images of a white calf swimming with its mother as part of a project they hope will help conservation efforts.

Researchers spotted the baby white whale while using a drone to conduct aerial surveys of southern right whale populations off the coast of Western Australia. 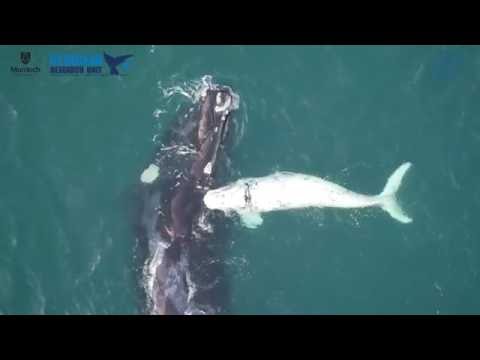 Lars Bejder, who took the drone footage with Christiansen off Augusta in the state's southwest in July and August, said the drones provided a new perspective on the animals.

Southern right whale populations are showing signs of recovery from the impact of whaling last century, but the population is still estimated to be relatively small at about 3,000 animals in Australian waters.

The white calf is rare as only about five percent of the species are born this colour. They darken to grey in their first year.

The drones are part of an innovative programme which also uses suction caps applied to the whales to measure their dives and sounds to learn more about the animals.

"Little is known about the three dimensional movements and habitat-use of southern right whales in their breeding and calving grounds in Australia," Bejder said in a statement.

He added that such data was vital for the animal's conservation given many areas in the region were slated for developments which would see an increase in shipping and tourism.

"Our aim is not only to study the behavioural ecology of these amazing animals, but also to provide information to industry and management towards conservation," he said.

The suction cup tags, carefully affixed to the animals via hand-held poles, stay attached for up to 24 hours and measure and record the depth, pitch and roll of swimming behaviour.

"The tag also records sound, which is sufficient for measuring sounds made by boats and those heard by the whales," said Bejder.