In the 2014 Disney animated movie "Big Hero 6," our hero Hiro (see what they did there?) invents cube-shaped microbots that swarm and link together to create virtually any object, shape or machine. In science fiction, the concept of swarming, hivemind nanobots isn't new, but Disney transformed the idea into some of the coolest animated effects of the year.

We're not quite at the stage of swarming microbots yet, but researchers at Queen's University in Ontario, Canada, are heading in that direction. The team has created a fleet of flying 3-D pixels powered by quadcopter drones encased in lightweight cubes.

Think of it as a sort of macro test run for future nanobot swarms. Developed at the Queen's University's Human Media Lab, the BitDrones system is being billed as a first step toward creating "interactive self-levitating programmable matter."

The BitDrones system actually incorporates three different kinds of 3-D pixels, or "voxels." The cubic ShapeDrones feature a light mesh and 3D-printed geometric frame around the miniature quadcopter. PixelDrones carry an onboard LED and small dot matrix screen. DisplayDrones are fitted with a curved and lightweight touchscreen monitor.

When the various models of BitDrones are deployed in a motion-capture environment, they work together to enable a physical, tactile user interface. Cameras mounted in the motion capture room track the individual location of each BitDrone, in coordination with a gesture-tracking system focused on the user. With touch and gesture, the user can then arrange the drones like physical pixels in the actual space of the room.

"We call this a Real Reality interface rather than a Virtual Reality interface," says professor and lead researcher Roel Vertegaal.on the lab's project page. This is what distinguishes it from technologies such as Microsoft HoloLens and the Oculus Rift: you can actually touch these pixels, and see them without a headset."

The current system uses around a dozen relatively large 2.5-inch to 5-inch drones. But the university team hopes to both reduce the drones' size - down to a half inch - as well as increase the number of drones into the thousands. You can check out the demo video below. 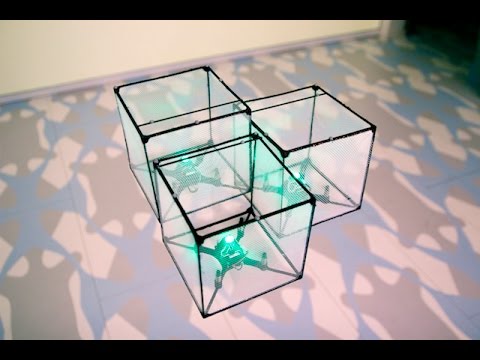 Domestic uses for drones are growing to a wide range of applications not even considered a few years ago.