Dogs Get What We Say and How We Say It

The study, published in the journal Science, is the first to investigate how dog brains process speech. The findings indicate that the neural mechanisms needed to process words were present in at least the last common ancestor of dogs and humans.

Dogs are still stand outs, though, when it comes to understanding our species.

RELATED: How Smart Is Your Dog? Find Out with 'Dognition'

"What makes dogs special is that they care about humans," lead author Attila Andics told Discovery News. "They attend to speech, so they have better chances for learning."

For the study, Andics, a researcher in the Department of Ethology and MTA-ELTE Comparative Ethology Research Group at Eötvös Loránd University, and his colleagues trained 13 dogs to lie down completely motionless in an fMRI brain scanner as their trainers talked to them. Prior studies on speech processing required more invasive methods conducted on animals such as rodents, but, in this case, the dogs were not restrained. If they indicated discomfort in any way, such as by wiggling a bit, the sessions were immediately stopped.

Meaningful, but not meaningless, words were processed in the dogs' left hemisphere, the brain activation images showed. The dogs' right hemisphere, conversely, activated when they were distinguishing different types of intonation, such as happy praising tones versus more neutral ones. As all of this audible information is taken in, a dog is then capable of understanding a familiar phrase, such as "Good boy!"

Words of praise were shown to activate the dogs' reward center, meaning the brain region that responds to pleasurable stimuli like food, sex, being petted, and -- in humans -- music that we enjoy.

"Our study suggests that both words and intonation matter for dogs," Andics said, adding that some dogs can differentiate hundreds of words. 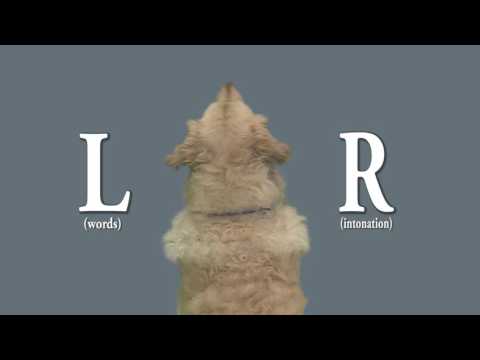 The key to getting your dog to understand you is to always use the same word for the same thing, he added. Exaggerating tone can also help. Many owners have instinctively learned to do that with both their dogs and their children.

Where dogs come short is in creating new vocalizations. It is thought that dogs are incapable of producing novel, meaningful sounds -- something that humans can do with relative ease.

RELATED: Dogs Probably Do Feel Sorry for Us

"Nevertheless, we know that they can learn to vocalize on command, which suggests that they have some capacities to voluntarily control their vocalizations, which can be the basis of vocal learning," Andics said.

As for other pets' ability to understand us, it is at least clear that cats, horses and many other animals understand our intonation. Angry, sad, anxious, happy and other tones "are universal, or at least they are similar across species," Andics added, referring to mammals.

Brian Hare, the author of the best-selling book "The Genius of Dogs," and associate professor of evolutionary anthropology at Duke University, told Discovery News that the new study challenges two big ideas. The first is the long-standing belief that left hemisphere lateralization is a signature of human language evolution. Dozens of studies have tested this theory in humans and other primates to pinpoint when the ability evolved.

"This study challenges the idea that the overall shift was any more than the exaggeration of a general mammalian pattern," Hare said. "It fits the idea that language evolved by co-opting existing organization and skills, not by re-inventing it de novo (anew)."

Hare continued, "I think the second idea it crushes is that all neuroscience with animals needs to be invasive ... This approach with dogs is better science because it's vastly more humane and powerful in that discoveries are possible with dogs that just are not possible with other species."

It could be that cats, horses and other animals understand much of what we say too, but getting a large horse or an uncooperative feline into an fMRI machine would pose challenges.