Dogs and Chimps Could Use Eyeglasses Too

A chimpanzee wearing bifocals, a dog sporting prescription sunglasses, and a bonobo undergoing Lasik-type surgery to correct his vision could all be in the future, since new research suggests some mammals suffer from far-sightedness and other vision-related issues that often affect people.

It may seem silly to outfit a wild animal with glasses, but scientists have determined that diminished eyesight, which often happens with aging, can hinder necessary tasks. Elderly chimps, for example, have been seen grooming each other from an uncomfortable distance, with the groomer holding his head back like a far-sighted person would.

Heungjin Ryu of the Primate Research Institute of Kyoto University told Seeker that he observed an older male bonobo named "TN" (pronounced "ten") grooming another bonobo, Jeudi. TN would stretch his arm way out to groom, and would only come closer when he found something.

TN grooming a bonobo that is grooming yet another bonobo: 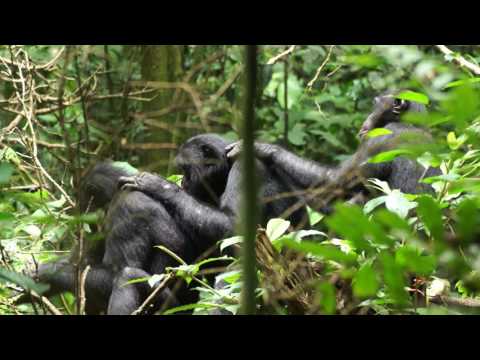 "The aging of the eyes seems to be very similar between humans and bonobos," Ryu said, adding that the problem could pose life-threatening challenges for wild bonobos, living as they do in the shade of the rainforest canopy.

To investigate the phenomenon, Ryu and his colleagues measured the grooming distance of 14 wild bonobos, aged 11–14, using digital photographs. They also looked at how grooming distance varies in relation to age and sex in bonobos and compared that data with information collected on focus distances in humans.

The study, published in the journal Current Biology, found that grooming distance increased exponentially with age. This was particularly evident for a chimp named Ki, who had been videotaped some time ago. Ki's eyesight now is clearly much worse than it was when the earlier video was shot.

Ryu explained that "many scientists and doctors have suggested that the lens of the eye gets rigid with age and becomes less responsive to contraction. Also, the muscle to control the lens might weaken with age."

While primates have different body sizes and average lifespans, he said that "the general age-related tendency for decreased eye function is probably shared across primate species" and "might be universal in some mammals."

National Zoo veterinarian Katharine Hope told Seeker that staff at the zoo have suspected primate eyesight could diminish with age.

"They've noticed older primates reaching for ropes, but missing them, or appearing not to see their preferred food items," she said.

It's believed that no chimp, bonobo or other primate in a zoo, however, has ever been prescribed glasses or undergone laser surgery just to correct near or far-sightedness.

Matt Steele, public engagement supervisor at San Diego Zoo Global said that most of the animals at his zoo are endangered.

"Unfortunately, not a lot is known about many of these species, and we are not aware of any work to evaluate vision at the level" Seeker inquired about, Steele said. "Our conservation scientists tend to focus their efforts on things that are threatening species survival."

In order for a zoo animal, such as a chimp, to wear corrective lenses, it would have to be trained extensively beforehand, Hope said.

"Primates like chimps and bonobos are very stubborn, funny and intelligent animals," she explained. "They would probably instantly tear apart the glasses and look at them thinking, 'What in the world is this?'"

Despite the name, "cats can and do wear the XS size," Doggles founder Roni Di Lullo toldSeeker.

Veterinary ophthalmologists determine the animal's prescription, which is sent over to Di Lullo and her team. They then make the eyewear that has a deeper lens cup and wider nose bridge than human glasses. It also wraps around the shape of the pet's head. The lenses are shatterproof and provide UV protection.

Heroics aside, more research is needed to determine if such eyewear will be tolerated by wild animals, much less many grouchy feline pets. Ryu can empathize. He also need glasses someday as his eyes age.

He admitted, "I am not used to glasses, and I suspect that I couldn't handle something heavy on my nose after 50s or later."

WATCH VIDEO: Can Dogs and Cats Be Left-Handed?