Cheetah cubs born March 8 at Cincinnati Zoo have a new guardian: a male Australian shepherd named Blakely who was called upon to bond with the five newbies after their mother died.

The cubs were born in an unusual way, delivered by C-section from their 5-year-old mom Willow. But, sadly, Willow passed away within two weeks, as weakness and loss of appetite overtook her after the procedure.

Now it's up to Blakely to be the cubs' best bud, as the little ones tumble all over and about him in their nursery home at the zoo: 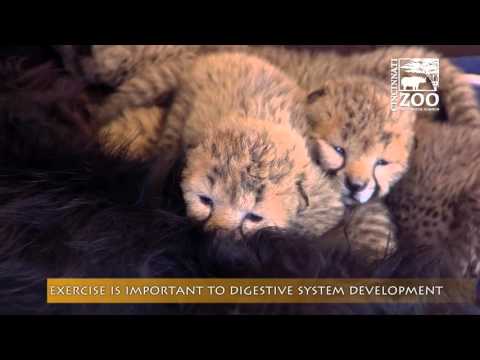 "His first job is to let the cubs climb on him, which they did as soon as they were put together," said Dawn Strasser, head nursery keeper at the zoo. "They need the exercise to build muscle tone and get their guts moving," she added in a press release.

Blakely's no stranger to being a nanny of sorts at the zoo. He's hung out with foxes, other cheetahs, ocelots, and even a warthog.

"In essence, Blakely is a nursery worker, helping interact and play with baby animals," the zoo's executive director Thane Maynard told TODAY.com. "It's cute and fun, and yet in terms of those babies growing up, that socialization is an important thing."

For their part, it's so far, so good for the little cubs, who have been under critical care since birth, receiving bottle feedings from staff and stepping up on the scale for frequent weigh-ins.

"They really turned a corner this weekend," Strasser pointed out. "They opened their eyes, had good appetites and, most importantly, they pooped!"

The plan is for the cubs to remain in the nursery for about two to three months. Once they've grown up a bit, they will be hand-raised and trained to become cheetah ambassadors at the zoo.

Then, presumably, Blakely will be assigned new duties in his companionable life.

Cincinnati Zoo is one of just a handful of facilities participating in cheetah breeding programs, and every new cub counts. Cheetahs (Acinonyx jubatus) are the fastest land animals, but they're also disappearing fast, with just fewer than 7,000 remaining, according to the International Union for Conservation of Nature's "red list" of threatened species.

, located in the North West Province of South Africa, west of Pretoria, witnessed an exciting development at the end of last month. A female cheetah the park had received from the Madikwe Game Reserve had given birth to four cubs. Seen here is the moment when the cheetah, named Rain, was first set loose in her new home.

Rain was moved to Pilanesberg from Madikwe so she'd have a better chance to thrive. Her new park had fewer predators with which to compete for food than did the Madikwe reserve. Here she scopes out her new surroundings.

Months after her release, Rain was seen in the company of two male cheetahs. A few months after those sightings, there were subtle hints that nature had taken its course and Rain had become a mom. Park staff had observed her behaving a bit strangely and staying out of sight for long periods of time. Sure enough, as we can see here, it turned out to be a confirmed case of cubs!

An environmental affairs member for the park soon set up a series of camera traps near the suspected location of the den. The results of that effort are the photos we have the pleasure of seeing here. Perhaps this leaping cub is camera shy!

Rain's litter size of four is about average, though it's possible for a cheetah mother to deliver about twice as many.

This little one seems acutely aware it's being watched by a camera's eye.

But the more important watchful eyes belong to Rain, who effortlessly tolerates her young ones flinging themselves at her leg.

Panthers on the Prowl: Photos

Mom's leg is good to hide behind as well.

So is her tail.

As the fun continues, Pilanesberg officials have high hopes that these little ones can all make it to adulthood, even though cheetah cub mortality rates can be scary-high -- as high as 90 percent, depending upon location. Good luck, little ones!