A dinosaur's evolutionary history was long thought to be determined by the shape of its pelvis, but scientists behind a new study say that it "overturns 130 years of dogma."

For 130 years, dinosaurs have been classified as either bird- or reptile-hipped - the first and all-important split in the trunk of an intricate family tree.

On Wednesday, a "revolutionary" study threatened to upend what has long been taken as gospel by preschoolers and palaeontologists alike - that a dinosaur's evolutionary history can be determined by the shape of its pelvis.

"Our analysis," he added, "suggests that animals like T. rex were actually more closely related to Stegosaurus" - dinos that were once thought to be firmly on either side of the hip divide.

A new dinosaur evolutionary tree, published in the journal Nature, proposes two new base groups, in which bird- and reptile-hipped lizards are now mixed.

It also suggests that dinosaurs arose around 247 million years ago - some 10 million years earlier than thought - and in the northern hemisphere rather than the south.

Barrett and a team examined a large sample of features of very early dinosaurs to learn more about the original, common ancestor and its first offshoots.

The first dinosaur, they concluded, was likely a small omnivore that walked on its hind legs and had grasping hands. These aspects have been the subject of much scientific debate.

But the most controversial finding concerns what happened next.

Dinosaurs split into two main groups, but quite unlike those assumed until now, said the team. 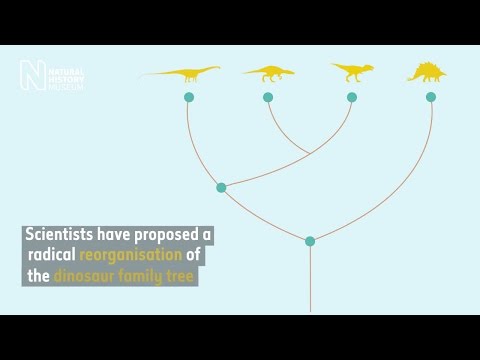 Birds find a home
Since the Victorian era, dinosaurs have been split into two categories: The bird-hipped (Ornithischia) and reptile-hipped (Saurischia).

The Saurischia group was sub-divided into bipedal carnivores called theropods, which included the likes of Tyrannosaurus Rex and Velociraptor, and the massive, long-necked sauropods such as Brontosaurus.

But under the new classification, bird-hipped dinos such as the three-horned Triceratops and armoured Stegosaurus no longer comprise one of the two basal categories.

Instead, they are sub-divided into a completely new category, called Ornithoscelida, along with theropods which were removed from under the reptile-hipped Saurischia.

"We have... pulled Theropods out, but the old Saurischia limps on," as one of the two foundational categories, the study's lead author Matthew Baron from the University of Cambridge told AFP.

The new Ornithoscelida category, he proposed, can be described as "bird-limbed." Its members share common hind-limb as well as skull features.

"We propose that the dinosaur family tree actually looks very different from the version that has been accepted by scientists for the last 130 years," said Baron.

For the first time, the ancestors of modern birds, reptile-hipped theropods, are grouped with bird-hipped dinosaurs into a single category.

If the conclusions are correct, said Baron's colleague David Norman, "All the major textbooks covering the topic of the evolution of the vertebrates will need to be re-written."

In a comment on the study, also published by Nature, Kevin Padian of the University of California described its conclusions as "revolutionary".

"It will be interesting to see how palaeontologists receive this original and provocative reassessment of dinosaur origins and relationships," he wrote.

Baron said he looked forward to the debate.

"We expect people in our field to test and retest our hypothesis and seek out new specimens and new data that may prove or disprove what we are proposing," he said by email.

"This is by no means the last word on the subject."