As we get better at studying atmospheres on alien worlds, we'll need to keep in mind that the detection of oxygen doesn't necessarily point to extraterrestrial biology.

When studying an alien world orbiting another star, one would think astronomers would be thrilled to detect oxygen in its atmosphere. Oxygen could mean life, after all. But in the case of GJ 1132b, which orbits a star 39 light-years away, the detection of oxygen would mean the exact opposite.

The exoplanet, which can be thought of as an "exo-Venus," is, as you'd expect, a hellish world. It has a very compact orbit around its star, at a distance of only 1.4 million miles, ensuring that it's constantly baked by the star's powerful radiation.

When it was discovered last year, GJ 1132b became a fascination for astronomers. Despite its rather extreme orbit, it seems to retain an atmosphere. This is contrary to what is expected; constant heating from the star and powerful stellar winds should bake-off the atmosphere very quickly, leaving a molten, barren planetary husk behind.

WATCH VIDEO: How We Find Water On Exoplanets 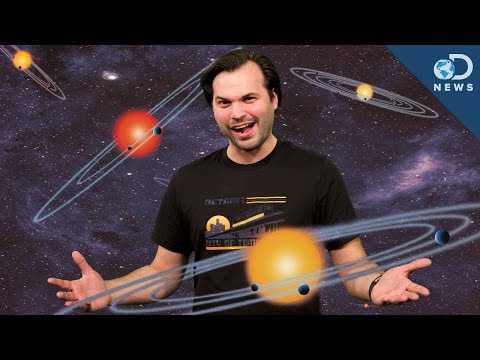 Now astronomers are trying to work out whether its atmosphere is thick, or whether it's thin and wispy. Starting with the assumption that GJ 1132b formed with a water-rich atmosphere, astronomer Laura Schaefer, of the Harvard-Smithsonian Center for Astrophysics (CfA), and her team believe the latter is most likely.

In that scenario, the water molecules (H2O) on the exoplanet would have been broken down by the powerful ultraviolet light, releasing the hydrogen atoms to space, leaving the heavier oxygen behind as a thin atmosphere.

To test this idea, we need more powerful observatories to analyze the world's spectroscopic signature to see if its atmosphere does indeed contain oxygen. NASA's James Webb Space Telescope, which is scheduled for launch in 2018, could be used to detect this atmospheric oxygen.

RELATED: Could Proxima Centauri Be Our Interstellar Getaway?

"On cooler planets, oxygen could be a sign of alien life and habitability. But on a hot planet like GJ 1132b, it's a sign of the exact opposite -- a planet that's being baked and sterilized," said Schaefer in a CfA statement.

Early in GJ 1132b's atmospheric evolution, its water vapor content would have acted as a powerful greenhouse gas, amplifying the star's already powerful heating. This would have ensured that the surface of the planet remained in a molten state for millions of years. Although the magma would have absorbed a little of the oxygen, and more would have been vented into space, enough would linger that could be detected with advanced astronomical studies.

"This planet might be the first time we detect oxygen on a rocky planet outside the solar system," said Robin Wordsworth, of the Harvard Paulson School of Engineering and Applied Sciences.

Through studies of GJ 1132b, astronomers hope to understand how Venus' atmosphere evolved. Venus, too, is thought to have evolved with a water-rich atmosphere, but over time, the sun's ultraviolet light broke down the water molecules -- a process known as "photodissociation" -- causing the lighter hydrogen to be lost to space. However, very little oxygen has been detected in the Venusian atmosphere, creating a puzzle for planetary scientists.

Refinements to Schaefer's magma ocean-atmosphere model could, in this case, also be used to better understand Venus' mysterious atmosphere, as well as revealing how an exoplanet's atmosphere evolves when more advanced observatories go online.