When a goat and donkey are separated, the goat appears ready to let life pass him by. Then the pair are reunited. Continue reading → 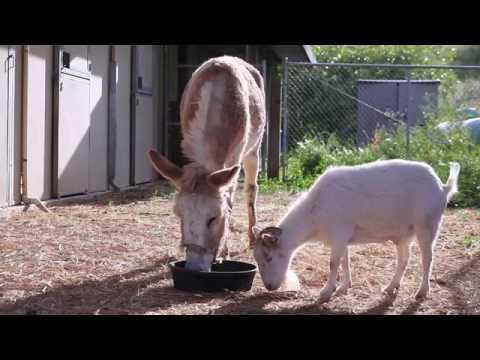 Goats have feelings too. A new video (above) making the rounds on the Internet shows how Mr. G, the goat, could not muster the heart even to eat when he was separated from his BFF, Jellybean -- a donkey.

The pair were taken, along with dozens of dogs and farm animals, from a neglectful animal hoarder in Southern California. When they were placed in separate sanctuaries, Mr. G slumped to a corner of his stall and stayed there -- not eating.

Volunteers at the animal sanctuary offered him treats like sweet grain and apples -- favorite foods for a goat. But he still wouldn't eat. Mr. G was given a thorough physical exam and appeared to be completely healthy -- just depressed. After four days, the staff decided something drastic needed to be done.

One of volunteers from Animal Place -- Mr. G's new home -- set off on a 14-hour road trip to collect Jellybean from her home and bring her to Animal Place.

As Jellybean arrives, Mr. G immediately perks up and jumps to his hooves. You can even see Mr. G taking a double-take as Jellybean is led into their pen. Mr. G runs up to Jellybean, touches noses and makes big snorts -- sucking in Jellybean's scent. Pretty soon he is playfully rubbing his back against the fence and, within 20 minutes, the newly perky goat is sharing a big bowl of grub with his buddy.

The lesson of the viral video tale (played to the soundtrack of "Home" by Chris Daughtry)? "Never doubt the depth of emotions other animals possess," -- as words on the video conclude.