Astronomers have found a protoplanetary disk surrounding a young star with a rather chilly secret.

Astronomers have found a protoplanetary disk surrounding a young star with a rather chilly secret: the planetary building blocks it contains are cold, so cold in fact that it doesn't jibe with current planetary formation models.

The star, called 2MASS J16281370-2431391, is located some 400 light-years from Earth in the Rho Ophiuchi star formation region. It is a stellar baby, sporting a stunning protoplanetary disk edge-on to us. The result is a glowing halo with a dark band in the middle and it's this dark band that has surprised astronomers.

Its appearance looks like something out of a retro sci-fi comic book, earning 2MASS J16281370-2431391′s protoplanetary disk the far more palatable moniker "Flying Saucer." When studying the Flying Saucer with the Atacama Large Millimeter/submillimeter Array (ALMA) in Chile and the IRAM 30-meter telescope in Spain, researchers detected something weird about the dust in the edge-on protoplanetary disk.

"This disc is not observed against a black and empty night sky. Instead it's seen in silhouette in front of the glow of the Rho Ophiuchi Nebula. This diffuse glow is too extended to be detected by ALMA, but the disc absorbs it," said Stephane Guilloteau, of the Laboratoire d'Astrophysique de Bordeaux, France, and study lead. "The resulting negative signal means that parts of the disc are colder than the background. The Earth is quite literally in the shadow of the Flying Saucer!" 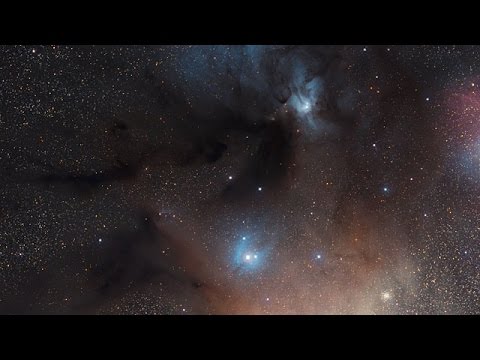 Guilloteau's team carried out the first ever direct measurements of the relatively large grains of dust in the Flying Saucer (measuring approximately one millimeter across), located around 15 billion kilometers (9 billion miles) from the star and found they had settled to a low temperature of -266 degrees Celsius - that's only 7 degrees above absolute zero. These grains will eventually go on to form planets as the system matures, but current theoretical models predict this dust should be at least 10 to 15 degrees (−258 to −253 degrees Celsius) above absolute zero. Although still cold, in the field of planetary formation models, this discrepancy is huge.

"To work out the impact of this discovery on disc structure, we have to find what plausible dust properties can result in such low temperatures," said co-author Emmanuel di Folco, also of Laboratoire d'Astrophysique de Bordeaux. "We have a few ideas - for example the temperature may depend on grain size, with the bigger grains cooler than the smaller ones. But it is too early to be sure."

This may sound like a minor complication in the field of planetary science, but the temperature of the dust in protoplanetary disks can greatly impact the size and developmental characteristics of the planets that eventually form. Cooler dust, for example, could allow larger planets to coalesce closer to their parent star in compact protoplanetary disks.

This image shows part of the Rho Ophiuchi region and a much enlarged close-up infrared view of the Flying Saucer from the NASA/ESA Hubble Space Telescope is shown as an insert.

The Atacama Large Millimeter/submillimeter Array (ALMA) is finally complete, after the project's final 12-meter antenna was handed over on Sept. 30, 2013. The 66th dish, shown here, is the last of 25 European-built instruments. The Joint ALMA Observatory (JAO) is a collaboration between the European Southern Observatory (ESO), the National Radio Astronomy Observatory (NRAO) and the National Astronomical Observatory of Japan (NAOJ).

All 66 millimetre/submillimetre-wave radio antennas are expected to be operational by the end of 2013, working together as one large telescope. ALMA will operate as an interferometer, spread over 16 kilometers of the Chajnantor Plateau in the Atacama Desert, Chile.

ALMA is sensitive to millimetre and submillimetre wavelengths, between infrared light and radio waves in the electromagnetic spectrum, a range that will help astronomers peel back the veil on distant objects in the Cosmos.

The giant antenna transporter, called Otto, delivers the final antenna to the array on Sept. 30, 2013.

The final dish was built by the European AEM Consortium, the largest of the project's contracts. North America delivered 25 12-meter antennas and East Asia delivered 16 (four 12-meter and twelve 7-meter).

"This is an important milestone for the ALMA Observatory since it enables astronomers in Europe and elsewhere to use the complete ALMA telescope, with its full sensitivity and collecting area," said Wolfgang Wild, the European ALMA Project Manager.

An artist's impression of the complete ALMA array in the Atacama Desert.

Possibly breaking the record for altitude record for a radio controlled hexacopter, this aerial photograph of ALMA in the extreme environment of the Atacama Desert in Chile was taken earlier this year.