Barbeled dragonfishes can open their mouths to 120 degrees, giving them the ability to swallow big prey whole.

The fish can open their mouths at least 120 degrees (a straight line measures 180 degrees) allowing them to eat extremely large prey relative to the size of these predators. Dragonfishes, described in the journal PLOS ONE, grow up to about one feet, six inches long.

"The barbeled dragonfishes are ambush lie-and-wait predators, advantageous because less energy is used searching for food. Because prey items are scarce, it is also advantageous to be able to swallow a wider size range of encountered prey and the head joint facilitates engulfing larger items," explained lead author Nalani Schnell of the French Muséum national d'Histoire naturelle.

The researchers, who have studied a myriad of fish anatomy over the years, have never seen anything like the head joint of the deep-sea dragonfishes.

The joint comprises the back of the head and a flexible rod running to the top of the fish's vertebral column. The researchers determined that, when the fish is in a resting position and not elevating its head, the rod has an additional sheath that embraces the back of the head like a socket. When the fish opens its mouth, the sheath gets stretched out and the bottom part of this rod is exposed.

The process is illustrated in the below video: 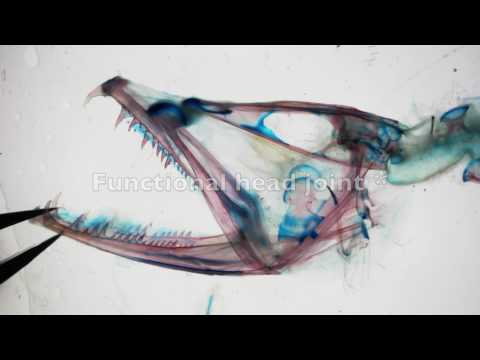 While the fish clearly has many sharp teeth, they don't actually break food up into bits.

Barbeled dragonfish "swallow their prey whole," Schnell explained. "The teeth are not for chewing; they instead hold onto prey and pass it into the stomach. Some dagger-like teeth even act as a cage, so that swallowed prey won't be able to escape anymore."

Once the fish has swallowed prey, such as another fish, its stomach can expand, causing the predator to look somewhat like a snake that has just swallowed a big victim.

Barbeled dragonfishes inhabit depths between 1640 and about 5000 feet below the water's surface, so they pose no threat to humans. The researchers said that in nets, most of these fish "come up dead due to the difference in pressure, temperature and more."

Few other animals, in land and in the sea, come close to having the mouth-opening skills of these fish. Humans are particularly lacking in this ability, since we all have an upper jaw that is fixed to our skull.

"Raising our head back doesn't then make our mouths any wider," Johnson said.

The scientists hope to learn more about these and other species in the ocean depths. As Johnson said, "We have gone into space, observed a man walk on the moon, and yet we still know so little about open oceans and the deep sea."

WATCH: How Does Mercury Get Into Fish?