The shocking decline of elephant populations in Africa highlights the devastating impact the loss of large mammals will have on the planet.

Elephants, rhinos, hippos and other megafauna are in steep decline now, which researchers find is having a disastrous impact on the environment and on smaller animals down the food chain.

Of particular concern at present is the overwhelming loss of African savanna elephants in recent years. Such pachyderms are declining by 30 percent in 15 of 18 countries surveyed, according to results of the three-year Great Elephant Census that were announced earlier this week. The census and accompanying African Elephant Atlas, produced by philanthropist Paul G. Allen's Vulcan, Inc., mark what is believed to be the largest ever Pan-African survey of savanna elephants.

Mike Chase, principal investigator for the Great Elephant Census, shares how the largest pan-Africa survey since the 1970s came to be, and how he hopes this data will save Africa's savanna elephants: 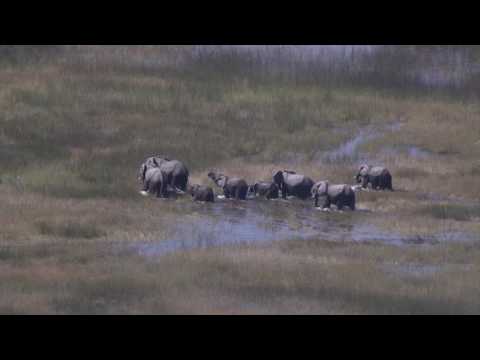 "Elephants are a keystone species that are essential in maintaining the biodiversity of ecosystems," James Deutsch, Vulcan Wildlife Conservation Director, told Discovery News, explaining that elephants positively affect not just one, but three types of landscapes: deserts, savannas and forests.

"In deserts," he explained, "elephants dig for water, providing water holes for other wildlife species. In savannas, they prevent the conversion of open grassland into dense bush -- enabling all of the grazing herbivores to survive. And in forests, they are critical seed dispersers -- many of the key rainforest tree species in Africa cannot regenerate without the fruits being eaten and the seeds transported and planted by elephants in their dung."

A 2014 conference at Oxford University, "Megafauna and ecosystem function: from the Pleistocene to the Anthropocene," came to similar conclusions, noting the ecosystem importance of elephants as well as other large terrestrial mammals.

In a paper summarizing the conference, University of New Mexico biologist Felisa Smith and her colleagues wrote: "One of the more pressing contemporary issues is the decline of megafauna and the loss of their ecological interactions within ecosystems. Across the Earth today, large animals are in peril, particularly predators."

It is estimated that a quarter of all such species are currently at risk of extinction. Two likely problems associated with the population declines are more frequent, intense wildfires and increased pressure on vegetation that sustains other life.

Regarding the former, Smith and her team explained that elephants decrease tree fuel loads in a natural way that reduces both the number of fires and their size. At present, it is believed that human activities, climate change and loss of megafauna are helping to drive an unprecedented number of wildfires around the globe. The Earth Island Institute, for example, reported that the six worst fire seasons in the past 50 years have all occurred since 2000.

As for increased pressure on vegetation, Smith and her team mention that large carnivores can generate "landscapes of fear," which sound awful, but actually wind up doing a lot of good.

During the Pleistocene Era (2.5 million to 11,700 years ago), for example, megafauna such as the scimitar cat, American lion, saber-tooth cat and short-faced bear -- all of which were larger than the modern African lion -- kept large numbers of plant-eating animals in check, such that vegetation remained relatively healthy and therefore was better able to support insects, birds, the herbivore prey species and more.

Even then, humans were killing off large mammals. A recent study published in the Proceedings of the National Academy of Sciences found that between 50,000 and 10,000 years ago, an increase in global human populations contributed to a two-thirds reduction of 150 species of megafauna. Lead author Nicole Boivin from the University of Oxford and the Max Planck Institute for the Science of Human History and her team found that the disappearance of these large animals has had "dramatic effects" on the structure of the ecosystem as well as on seed dispersal.

The advent of agriculture worldwide and the domestication of animals raised for food has further inflicted "unprecedented and enduring effects" on the distribution of megafauna and other species, according to Boivin and her colleagues. They add that, in contrast with domesticated animals (dogs alone are estimated at numbering one billion now), the percentage of truly wild large animals today is "vanishingly small."

WATCH VIDEO: Can 3-D Printing Save Rhinos From Extinction

There is yet another problem helping to fuel the decline of megafauna, according to George Wittemyer, an associate professor in the Department of Fish, Wildlife, and Conservation Biology at Colorado State University and chairman of the scientific board for Save the Elephants.

In a paper recently published in the Journal of Applied Ecology, Wittemyer and his team detailed the strikingly slow reproductive rates of forest elephants. This, he told Discovery News, "places them among the slowest reproducing mammals on the planet."

He added, "This information elevates concerns regarding the conservation status of forest elephants, which have been the focus of the most intensive poaching over the past two decades. These data indicate that forest elephants are unlikely to return to pre-poaching numbers for nearly a century."

Deutsch told Discovery News that Africa is now losing 25,000–35,000 elephants per year, with losses in Ruaha, Tanzania; Niassa, Mozambique; and throughout southeast Angola being particularly high. Rhinos, which also have very slow reproduction rates, are also in a severe population decline. Some rhino subspecies, such as the Northern white rhino, are now represented by less than 5 individuals. Armed guards attempt to protect them 24/7 from poachers.

To combat the loss of elephants, rhinos and other targets of poachers, Deutsch said three steps must be taken immediately, and the general public can help.

Second, he said that we need to stop the trafficking of endangered animals.

"Readers should urge elected officials, in the United States and abroad, to treat wildlife trafficking as a serious international crime," he said.

Finally, governments must be pressured to close domestic ivory markets that are devastating rhino and elephant populations. To do this, Deutsch said national representatives should be urged to press the Convention on International Trade in Endangered Species to block any future international ivory sales.

Time is of the essence, though, given how fast elephants and other megafauna are disappearing.

"If you cut enough strands from a web, eventually it collapses, and we're cutting fast," Deutsch said. "We can't afford to just wait and see and hope for the best, because the consequences won't be good."