Deadly Mites Can Leap From Flowers Onto Bees, This First-Ever Video Shows

For the first time, Varroa mites have been recorded hopping onto honey bees from flowers, and doing so with surprising agility, according to a study published in the journal PLOS ONE.

Researchers from Cornell University recorded the footage. It matters because Varroa mites are the scourge of honey bee populations worldwide, infesting managed and wild colonies alike. The tiny parasites feed on bee adults and larvae, making the fliers more prone to infections and passing onto them illnesses such as deformed wing virus. If a mite infestation is pervasive enough, entire colonies can collapse, helping wipe out an insect whose pollinating ways are a key to global food supplies.

In professionally managed beekeeping colonies, the mites likely spread by latching themselves onto bees that move between hives. In the wild, however, even colonies widely spaced apart are victims of the mites, even though bees from those colonies don't tend to invade other hives.

Mites present in those wild colonies got there from flowers, scientists thought, even as visual proof eluded them, until now.

"No one has ever shown that bees flying naturally and freely, arriving at flowers and then leaving as they wished, presented a large enough opportunity for Varroa mites to make these jumps," said the study's lead author, Cornell graduate student David Peck, in a statement.

To determine whether flowers were indeed launching pads for the mites, Peck and his colleagues brought a colony of honey bees to a site in upstate New York, where they placed Varroa mites on flowers and watched what happened when the bees arrived.

Lo and behold, the mites – blind and not terribly big-brained – were able to leap right onto the bees with grace and purpose. The video below, when slowed down to 40 percent speed, plainly shows a mite hopping on for a ride. 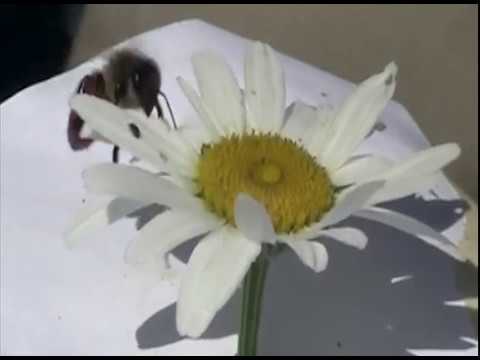 And, the mites know how to be sneaky about it. "A noteworthy result that we didn't originally expect was that once the mites get onto the bees, they show some pretty sophisticated behaviors to avoid getting groomed off," said Peck. It seems that once on-board, the bugs scurry to places the bee can't reach, such as high up in the bee's back.

Once there for the ride, it's game over. The hitchhiking mites disembark at nests and then infest larval-stage bees in their cells.

In addition to proving another means of transportation for the mites, the scientists say their findings should raise alarms about the parasite spreading yet further across the globe, particularly via the shipping of cut flowers that are sold in markets.

"If a mite could jump from a flower onto a bee that tried to visit one of these flowers at an open-air flower market, the result could be disastrous," Peck said, adding that protections to prevent that outcome – such as spraying the flowers or restricting shipments to only flowers grown in secure settings – should be considered.

WATCH VIDEO: What Would Happen If All The Bees Died?