What does a captain who's also a rock climber do? Set up a belay from his sailboat, obviously. Continue reading →

He may not look like James Bond, but Bob Watson has been envisioning a feat worthy of the British action hero for 25 years.

The white-haired captain decided to combine his passions for sailing and rock climbing at towering cliffs on England's southwest coast.

Captain Bob Watson brought two climbing buddies and a camera crew with him to Berry Head near Brixham last September. This coastal headland is a nature sanctuary known for its beautiful cliffs. The weather was sunny, the wind light, and access restrictions to protect local seabirds had been lifted.

The limestone route, called Moonraker at The Old Redoubt, is a three-pitch climb. Despite the big holds, it's rated HVS 5a, which stands for "hard very severe" in the British grading system.

"Well, this has been in gestation for 25 years, basically," Watson said in filmmaker David Linnett‘s video. His plan: "Sail in, do a route, abseil down, back into the boat, and off you go."

Of course, the sailboat Erin doesn't end up being the most stable base for belaying - at one point things get a bit "lively" as water splashes up over the side. But the anchor holds. 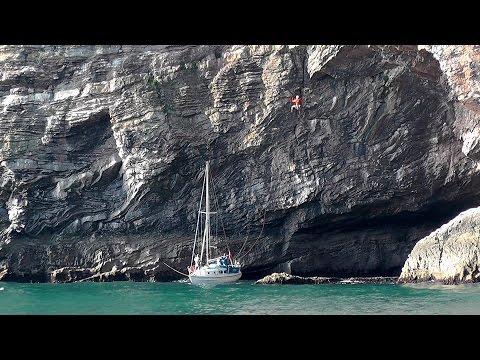 For a brief moment near the start of that video, I thought the captain might just be offering his boat as a belay spot for other climbers. Nope! The guy's all geared up and ready to go. Although 23 years had passed since he climbed the three-pitch climb, he still looked comfortable on the rock face.

"All we've got to do is sail away now and not destroy the boat," Watson says upon arriving at the top of the climb, right before getting ready to rappel down the cliff back to the water. Aye aye, Captain.

As Tommy Caldwell and Kevin Jorgeson near the summit of Yosemite's Dawn Wall, we asked renowned climbers Lynn Hill and Jimmy Chin (who took this photo) for their insights into the hardest big wall free climbs. Hill made the first free ascent of the nearby face known as The Nose in 1993, and then climbed it in just a day in 1994. Chin, who has made first ascents on big walls in Pakistan and India, photographed climbing in Yosemite in a 2012 National Geographic spread. Just as the current Dawn Wall project had been considered too difficult to ever be free-climbed, the future of the sport lies in what today seems unfathomable.

Essential Skills for Climbing El Capitan that Apply to Any Adventure

"The future of free climbing is in the big mountain regions of the world," such as the Karakoram range, Chin said. The challenge is so unimaginable, he said, "because you're adding altitude and cold and severe weather." And unlike Yosemite, where a rescue (or a latte) is within range, these areas are incredibly remote. "There would be no chance of a rescue," Hill said. "You have a hard time just breathing and getting supplies there." The east face of the Great Trango Tower, which reaches about 20,000 feet, tops the list because of its near-vertical drop -- the word's biggest. Even with ladder-like devices to move through the harder sections, people have died trying to climb and descend it.

Climbing: What's The Next Everest?

"It's kind of like putting El Cap on top of Denali," said Chin, who was part of the team that completed the first ascent of a route called Shark's Fin in 2011. "I like to fantasize, looking at the route, and wonder if guys like Tommy would ever be able to free climb it," he said. "Because that would be amazing." Chin, along with Conrad Anker and Renan Ozturk, summited using alpine rock and ice equipment, and free-climbing the easier sections. Free-climbing the entire route would be a different realm -- and possibly not in this generation of climbers. If Caldwell doesn't do it, maybe his kids will, Chin said.

Photo: Climber Nina Caprez on Silbergeier in 2012. She was the first woman to ascend the pitch.

This route is "pretty scary," Hill says, because after climbing a pitch rated 5.14 (most difficult), you have to climb another 40 feet without any protection. Calum Muskett, who ascended last summer, called that section "terrifying." And there are multiple 5.14 pitches. Although she hasn't climbed it herself, Hill says the hard parts are higher on the route. Imagine kicking into a higher gear after a long distance of climbing: "Perhaps it's like doing a 5-minute

How Our Bodies Adapt to Mountain Climbing

A decade or so ago, the Dawn Wall wasn't on the radar of even the best climbers. The holds are so small that the walls appear to be blank, and must be climbed in chilly temperatures so that perspiration doesn't interfere with holding on to the razer-thin rock. "Most people would be intimidated just standing at the base," Hill said. "There are really only a few people who push things." Namely, Caldwell, who is a connoisseur of challenging climbing, Chin said: "So if anyone is going to pick the hardest possible thing on El Cap, it's Tommy." Of course, each generation has made such vast improvements in the sport that perhaps, Chin said, "three generations from now, maybe climbers will be doing laps on that route. Who knows?"