Daredevils Surf a Mountain Zipline and then BASE Jump

The Flying Frenchies give these daring deeds an unexpectedly comedic twist.

BASE jumping can be seriously dangerous, but the collective known as the Flying Frenchies is giving this daring activity an unexpectedly comedic twist.

Living up to their name, these French aerialists flew across a zipline set at a height of nearly 2,000 feet between cliffs in the Vercors Massif near Corrençon-en-Vercors, France, earlier this month. At one point they were riding a surfboard along the line going 46 mph. Donning clown wigs, face paint, brightly colored costumes and spewing feathers, they released themselves into the valley like members of an extreme sport circus.

"We are clowns, gentle fools and we throw ourselves in the empty spaces, surfing the air to provoke and to be seen, representing the atypical dreamers' minority," Flying Frenchies member Anicet Leone told Red Bull in an existential Q&A about their Surfing the Line project.

The group consists of around a half-dozen members who all have athletic and artistic skills - and perform at soaring heights. For this project, they make surfing so far above the ground look almost normal.

"It was so crazy to surf like that, after two years of dreaming about it," Leone said in the interview. In addition to performing a bunch of sweet stunts on the speeding board, the group sent band members out to play their instruments while suspended from the line. A strange tomato-shaped pod filled with loose feathers also delivered the aerialists to a jumping-off point. 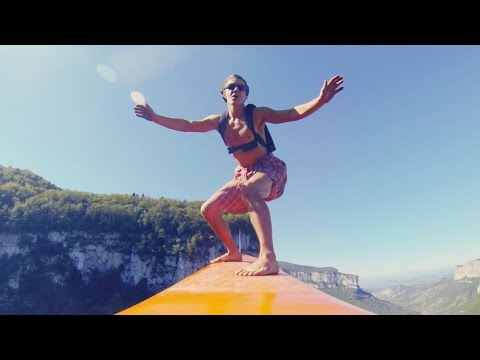 In January, the group lost one of their founding members, Tancrède Melet. He died during an accidental fall in southern France while preparing to walk a tightrope suspended between two hot air balloons. News reports said that Melet was on the ground when one of the hot air balloons unexpectedly took off. Unable to release himself right away, he dropped from nearly 100 feet.

For the month that the collective was in the Vercours mountain range working on Surfing the Line, they had a zero accident goal, according to Leone. While jumping from great heights with a parachute is never risk-free, he also didn't want to add any unnecessary high risk.

Currently a longer documentary about the dizzying project is in the works. In the meantime, highlights still allow us to watch the Flying Frenchies look fear in the face and chuckle.