This week, the 105-year-old cyclist Robert Marchand rode 14 miles around a velodrome in one hour.

"He has the heart of someone who's 60 years old," cycling coach Jean-Michel Richefort told the AFP this week. That's actually quite the compliment for 105-year-old Frenchman Robert Marchand, who just set a new world record in a velodrome outside Paris.

Marchand, in a blazing yellow and purple jersey, got on his bike and steadily cycled 14 miles - 92 laps - around the Saint-Quentin-en-Yvelines National Velodrome in one hour. No other cyclist his age has achieved that. During his final lap, the crowd packing the velodrome chanted his first name and then gave him a standing ovation, the Associated Press reported.

The wiry Parisian is certainly no stranger to record-setting. He rolled into the record books in 2012 by going 15 miles in one hour, the best time for a cyclist over 100 years old. Three years ago he bettered that time, reaching 16.73 miles in an hour.

His heart is exceptional, Richefort, who is one of his coaches, explained in an AFP video interview. Marchand's heartbeat is quite slow and regular, he added. In a 20-minute test this week, his heart rate never went above 100 beats per minute.

Born on November 26, 1911, Marchand had numerous careers including firefighting, lumberjacking, wine selling and gardening. When he first started cycling as a youngster, a coach told him he wouldn't go far, the AP reported. I'm sure that unimaginative coach is long gone, while Marchand is pedaling onward.

A good diet, no smoking, and of course joie de vivre partially explain Marchand's longevity. His stationary bike takes up a lot of space in the tiny studio apartment where he lives in Paris.

After setting the world record yesterday, Marchand told reporters at the velodrome his secret. "When you're old like me, you should never stop for too long," he said. "Every day in the morning you have to do something, four or five kilometers." 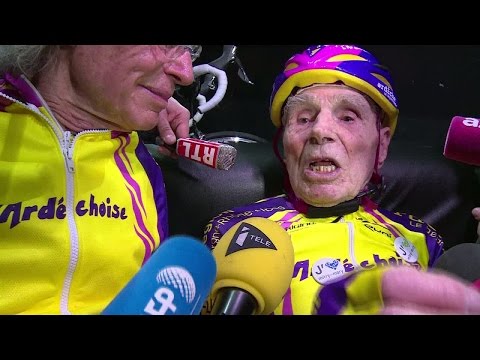