Why point and click when you can tap and kick?

Even though we're in the midst of the Information Age, a lot of folks simply aren't getting the message: Neglecting physical activity after hours spent at a desk just isn't good for you. For desk-bound workers tied to their chairs, a new computer interface developed by researchers at the University of Waterloo in Canada encourages users to tap and kick rather than point and click.

Presented today at the Association for Computing Machinery's Designing Interactive Systems 2016 in Brisbane, Australia, the innovative system employs a standing desk and a wearable device attached at the foot. A Kinect camera monitors a user's movements, while pressure sensors on shoe insoles track toe and heel contact.

8 Ways Your Office Job Is Killing You

The setup captures a variety of user movements, each serving as an input for a some function otherwise performed with a mouse or keyboard on a computer screen. Stepping forward with the heel, for example, might open a new tab in a browser, while a kick might close an application.

The system doesn't completely replace a mouse and keyboard setup, but merely acts as a "cyberslacking deterrent," according to the developers, by encouraging a user to keep moving while staying productive. The developers even experimented with distracting content that prompts users to further exert themselves, say standing in a lunge for example, to put in a little extra effort.

Having trouble remembering what command was assigned to which movement? Simply jump, and a help screen pops up. See how the whole interface works in the video below: 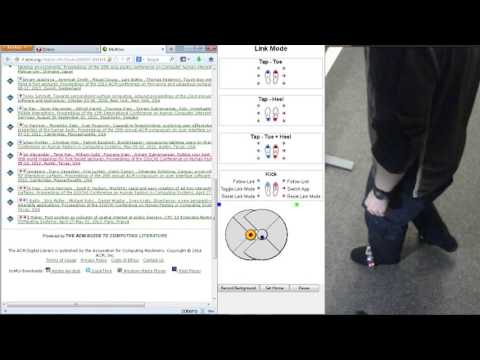 Fidget For Your Life!

The new system is the latest attempt by engineers to get desk jockeys out of their chairs. Sitting has been described as the new smoking because of the negative health risks that accumulate over the years.

Until the latest Tap-Kick-Click system by the University of Waterloo developers hits the stores, there are a number of ways office workers can mitigate the health risks associated with extended periods of sitting by acquiring or if need be improvising a standing desk. Another option is standing during calls, or trying a treadmill desk. One study published last year even suggested fidgeting could be enough to stave off the health risks. The bottom-line is: If you have to sit all day, just keep moving.

WATCH: Why Working Too Much Is TERRIBLE For You