Curiosity Sings 'Happy Birthday' to Itself On Mars: Video

NASA scientists have commanded one of Curiosity's instruments to hum out the tune of "Happy Birthday" to commemorate the rover's first year on the Martian surface. Continue reading → 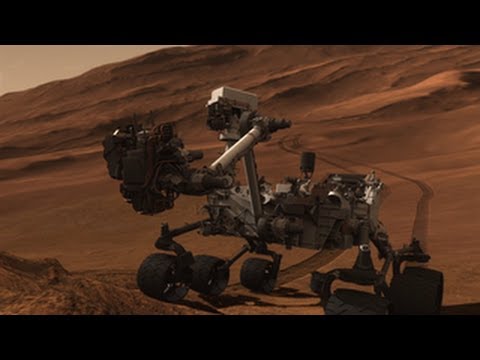 Curiosity is no stranger to "firsts." The one-ton rover is the first to laser-blast a Mars rock; it was also the first to carry out X-ray diffraction analysis on a bit of Mars dirt. The rover also became a popular culture trendsetter by transmitting a song from another planet to Earth.

Now, those Curiosity scientists have humanized their robot yet again with another "first" - they've commanded one of Curiosity's instruments to hum out the tune of "Happy Birthday" to commemorate the rover's first year on the Martian surface.

Using the Sample Analysis on Mars (SAM) instrument, the most sophisticated chemistry lab ever to be sent to Mars, scientists have programmed it to resonate at varying frequencies that correspond to the notes of the famous birthday song. Usually, this resonance helps finely-ground samples of Mars dirt to filter through SAM for analysis - today, it had a whole different use.

The tune can be heard in the video above and, judging by the volume, even in the thin Martian air, it should be audible.

So this is another Curiosity "first" - the first time "Happy Birthday" has been hummed out on another world.

Sadly, it's also the loneliest 1st birthday party in the solar system... ever.